History of Egypt, Chald?a, Syria, Babylonia, and Assyria, Volume 5 (of 12) 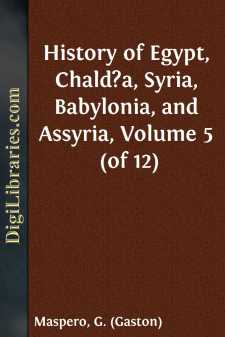 Thutmosis III.: the organisation of the Syrian provinces—Amenothes III.: the royal worshippers of Atonû.

In the year XXXIV. the Egyptians reappeared in Zahi. The people of Anaugasa having revolted, two of their towns were taken, a third surrendered, while the chiefs of the Lotanû hastened to meet their lord with their usual tribute. Advantage was taken of the encampment being at the foot of the Lebanon to procure wood for building purposes, such as beams and planks, masts and yards for vessels, which were all shipped by the Kefâtiu at Byblos for exportation to the Delta. This expedition was, indeed, little more than a military march through the country. It would appear that the Syrians soon accustomed themselves to the presence of the Egyptians in their midst, and their obedience henceforward could be fairly relied on. We are unable to ascertain what were the circumstances or the intrigues which, in the year XXXV., led to a sudden outbreak among the tribes settled on the Euphrates and the Orontes. The King of Mitanni rallied round him the princes of Naharaim, and awaited the attack of the Egyptians near Aruna. Thûtmosis displayed great personal courage, and the victory was at once decisive. We find mention of only ten prisoners, one hundred and eighty mares, and sixty chariots in the lists of the spoil. Anaugasa again revolted, and was subdued afresh in the year XXXVIII.; the Shaûsû rebelled in the year XXXIX., and the Lotanû or some of the tribes connected with them two years later. The campaign of the year XLII. proved more serious. Troubles had arisen in the neighbourhood of Arvad. Thûtmosis, instead of following the usual caravan route, marched along the coast-road by way of Phoenicia. He destroyed Arka in the Lebanon and the surrounding strongholds, which were the haunts of robbers who lurked in the mountains; then turning to the northeast, he took Tunipa and extorted the usual tribute from the inhabitants of Naharaim. On the other hand, the Prince of Qodshû, trusting to the strength of his walled city, refused to do homage to the Pharaoh, and a deadly struggle took place under the ramparts, in which each side availed themselves of all the artifices which the strategic warfare of the times allowed. On a day when the assailants and besieged were about to come to close quarters, the Amorites let loose a mare among the chariotry of Thûtmosis. The Egyptian horses threatened to become unmanageable, and had begun to break through the ranks, when Amenemhabî, an officer of the guard, leaped to the ground, and, running up to the creature, disembowelled it with a thrust of his sword; this done, he cut off its tail and presented it to the king. The besieged were eventually obliged to shut themselves within their newly built walls, hoping by this means to tire out the patience of their assailants; but a picked body of men, led by the same brave Amenemhabî who had killed the mare, succeeded in making a breach and forcing an entrance into the town....