History of Egypt, Chald?a, Syria, Babylonia, and Assyria, Volume 4 (of 12) 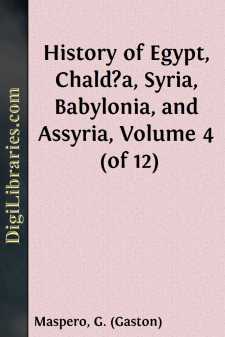 CHAPTER ITHE FIRST CHALDÆAN EMPIRE AND THE HYKSÔS IN EGYPT

Syria: the part played by it in the ancient world—Babylon and the first Chaldæan empire—The dominion of the Hyksôs: Âhmosis.

Some countries seem destined from their origin to become the battle-fields of the contending nations which environ them. Into such regions, and to their cost, neighbouring peoples come from century to century to settle their quarrels and bring to an issue the questions of supremacy which disturb their little corner of the world. The nations around are eager for the possession of a country thus situated; it is seized upon bit by bit, and in the strife dismembered and trodden underfoot: at best the only course open to its inhabitants is to join forces with one of its invaders, and while helping the intruder to overcome the rest, to secure for themselves a position of permanent servitude. Should some unlooked-for chance relieve them from the presence of their foreign lord, they will probably be quite incapable of profiting by the respite which fortune puts in their way, or of making any effectual attempt to organize themselves in view of future attacks. They tend to become split up into numerous rival communities, of which even the pettiest will aim at autonomy, keeping up a perpetual frontier war for the sake of becoming possessed of or of retaining a glorious sovereignty over a few acres of corn in the plains, or some wooded ravines in the mountains. Year after year there will be scenes of bloody conflict, in which petty armies will fight petty battles on behalf of petty interests, but so fiercely, and with such furious animosity, that the country will suffer from the strife as much as, or even more than, from an invasion. There will be no truce to their struggles until they all fall under the sway of a foreign master, and, except in the interval between two conquests, they will have no national existence, their history being almost entirely merged in that of other nations.

From remote antiquity Syria was in the condition just described, and thus destined to become subject to foreign rule. Chaldæa, Egypt, Assyria, and Persia presided in turn over its destinies, while Macedonia and the empires of the West were only waiting their opportunity to lay hold of it. By its position it formed a kind of meeting-place where most of the military nations of the ancient world were bound sooner or later to come violently into collision. Confined between the sea and the desert, Syria offers the only route of easy access to an army marching northwards from Africa into Asia, and all conquerors, whether attracted to Mesopotamia or to Egypt by the accumulated riches on the banks of the Euphrates or the Nile, were obliged to pass through it in order to reach the object of their cupidity. It might, perhaps, have escaped this fatal consequence of its position, had the formation of the country permitted its tribes to mass themselves together, and oppose a compact body to the invading hosts; but the range of mountains which forms its backbone subdivides it into isolated districts, and by thus restricting each tribe to a narrow existence maintained among them a mutual antagonism....