History of Egypt, Chald?a, Syria, Babylonia, and Assyria, Volume 3 (of 12) 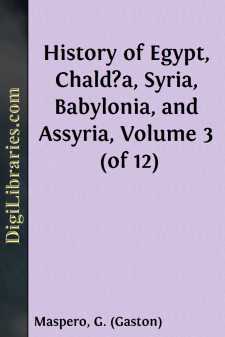 The Creation, the Deluge, the history of the gods—The country, its cities its inhabitants, its early dynasties.

"In the time when nothing which was called heaven existed above, and when nothing below had as yet received the name of earth,* Apsu, the Ocean, who first was their father, and Chaos-Tiâmat, who gave birth to them all, mingled their waters in one, reeds which were not united, rushes which bore no fruit."** Life germinated slowly in this inert mass, in which the elements of our world lay still in confusion: when at length it did spring up, it was but feebly, and at rare intervals, through the hatching of divine couples devoid of personality and almost without form. "In the time when the gods were not created, not one as yet, when they had neither been called by their names, nor had their destinies been assigned to them by fate, gods manifested themselves. Lakhmu and Lakhamu were the first to appear, and waxed great for ages; then Anshar and Kishar were produced after them. Days were added to days, and years were heaped upon years: Anu, Inlil, and Ea were born in their turn, for Anshar and Kishar had given them birth." As the generations emanated one from the other, their vitality increased, and the personality of each became more clearly defined; the last generation included none but beings of an original character and clearly marked individuality. Anu, the sunlit sky by day, the starlit firmament by night; Inlil-Bel, the king of the earth; Ea, the sovereign of the waters and the personification of wisdom.*** Each of them duplicated himself, Anu into Anat, Bel into Belit, Ea into Damkina, and united himself to the spouse whom he had deduced from himself. Other divinities sprang from these fruitful pairs, and the impulse once given, the world was rapidly peopled by their descendants. Sin, Shamash, and Kamman, who presided respectively over the moon, the sun, and the air, were all three of equal rank; next came the lords of the planets, Ninib, Merodach, Nergal, the warrior-goddess Ishtar, and Nebo; then a whole army of lesser deities, who ranged themselves around Anu as round a supreme master. Tiâmat, finding her domain becoming more and more restricted owing to the activity of the others, desired to raise battalion against battalion, and set herself to create unceasingly; but her offspring, made in her own image, appeared like those incongruous phantoms which men see in dreams, and which are made up of members borrowed from a score of different animals. They appeared in the form of bulls with human heads, of horses with the snouts of dogs, of dogs with quadruple bodies springing from a single fish-like tail. Some of them had the beak of an eagle or a hawk; others, four wings and two faces; others, the legs and horns of a goat; others, again, the hind quarters of a horse and the whole body of a man. Tiâmat furnished them with terrible weapons, placed them under the command of her husband Kingu, and set out to war against the gods.

* In Chaldæa, as in Egypt, nothing was supposed to have areal existence until it had received its name: the sentencequoted in the text means practically, that at that timethere was neither heaven nor earth....
Show more
Show less