History Of Egypt, Chald?a, Syria, Babylonia, and Assyria, Volume 1 (of 12) 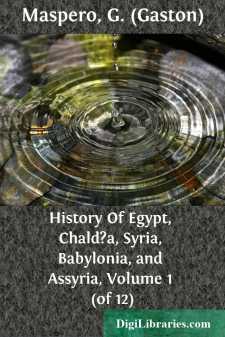 Professor Maspero does not need to be introduced to us. His name is well known in England and America as that of one of the chief masters of Egyptian science as well as of ancient Oriental history and archaeology. Alike as a philologist, a historian, and an archaeologist, he occupies a foremost place in the annals of modern knowledge and research. He possesses that quick apprehension and fertility of resource without which the decipherment of ancient texts is impossible, and he also possesses a sympathy with the past and a power of realizing it which are indispensable if we would picture it aright. His intimate acquaintance with Egypt and its literature, and the opportunities of discovery afforded him by his position for several years as director of the Bulaq Museum, give him an unique claim to speak with authority on the history of the valley of the Nile. In the present work he has been prodigal of his abundant stores of learning and knowledge, and it may therefore be regarded as the most complete account of ancient Egypt that has ever yet been published.

In the case of Babylonia and Assyria he no longer, it is true, speaks at first hand. But he has thoroughly studied the latest and best authorities on the subject, and has weighed their statements with the judgment which comes from an exhaustive acquaintance with a similar department of knowledge.

Naturally, in progressive studies like those of Egyptology and Assyriology, a good many theories and conclusions must be tentative and provisional only. Discovery crowds so quickly on discovery, that the truth of to-day is often apt to be modified or amplified by the truth of to-morrow. A single fresh fact may throw a wholly new and unexpected light upon the results we have already gained, and cause them to assume a somewhat changed aspect. But this is what must happen in all sciences in which there is a healthy growth, and archaeological science is no exception to the rule.

The spelling of ancient Egyptian proper names adopted by Professor Maspero will perhaps seem strange to many. But it must be remembered that all our attempts to represent the pronunciation of ancient Egyptian words can be approximate only; we can never ascertain with certainty how they were actually sounded. All that can be done is to determine what pronunciation was assigned to them in the Greek period, and to work backwards from this, so far as it is possible, to more remote ages. This is what Professor Maspero has done, and it must be no slight satisfaction to him to find that on the whole his system of transliteration is confirmed by the cuneiform tablets of Tel el-Amarna.

The difficulties attaching to the spelling of Assyrian names are different from those which beset our attempts to reproduce, even approximately, the names of ancient Egypt. The cuneiform system of writing was syllabic, each character denoting a syllable, so that we know what were the vowels in a proper name as well as the consonants. Moreover, the pronunciation of the consonants resembled that of the Hebrew consonants, the transliteration of which has long since become conventional....