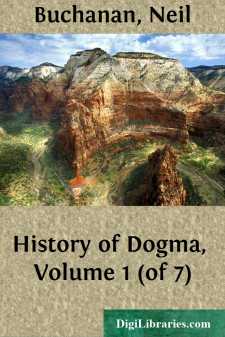 THE AUTHOR'S PREFACE TO THE ENGLISH EDITION.

No theological book can obtain a place in the literature of the world unless it can be read both in German and in English. These two languages combined have taken the place of Latin in the sphere of Christian Science. I am therefore greatly pleased to learn that my "History of Dogma" has been translated into English, and I offer my warmest thanks both to the translator and to the publishers.

The most difficult part of the history of dogma is the beginning, not only because it contains the germs of all later developments, and therefore an error in observation here endangers the correctness of the whole following account, but also because the selection of the most important material from the history of primitive Christianity and biblical theology is a hard problem. Some will think that I have admitted too much into the book, others too little. Perhaps both are right. I can only reply that after repeated consideration and experiment I continue to be satisfied with my selection.

In taking up a theological book we are in the habit of enquiring first of all as to the "stand-point" of the Author. In a historical work there is no room for such enquiry. The question here is, whether the Author is in sympathy with the subject about which he writes, whether he can distinguish original elements from those that are derived, whether he has a thorough acquaintance with his material, whether he is conscious of the limits of historical knowledge, and whether he is truthful. These requirements constitute the categorical imperative for the historian: but they can only be fulfilled by an unwearied self-discipline. Hence every historical study is an ethical task. The historian ought to be faithful in every sense of the word; whether he has been so or not is the question on which his readers have to decide.

FROM THE AUTHOR'S PREFACE TO THE FIRST EDITION.

The task of describing the genesis of ecclesiastical dogma which I have attempted to perform in the following pages, has hitherto been proposed by very few scholars, and, properly speaking, undertaken by one only. I must therefore crave the indulgence of those acquainted with the subject for an attempt which no future historian of dogma can avoid.

At first I meant to confine myself to narrower limits, but I was unable to carry out that intention, because the new arrangement of the material required a more detailed justification. Yet no one will find in the book, which presupposes the knowledge of Church history so far as it is given in the ordinary manuals, any repertory of the theological thought of Christian antiquity. The diversity of Christian ideas, or of ideas closely related to Christianity, was very great in the first centuries. For that very reason a selection was necessary; but it was required, above all, by the aim of the work. The history of dogma has to give an account, only of those doctrines of Christian writers which were authoritative in wide circles, or which furthered the advance of the development; otherwise it would become a collection of monographs, and thereby lose its proper value....