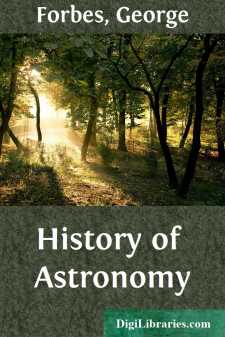 The growth of intelligence in the human race has its counterpart in that of the individual, especially in the earliest stages. Intellectual activity and the development of reasoning powers are in both cases based upon the accumulation of experiences, and on the comparison, classification, arrangement, and nomenclature of these experiences. During the infancy of each the succession of events can be watched, but there can be no à priori anticipations. Experience alone, in both cases, leads to the idea of cause and effect as a principle that seems to dominate our present universe, as a rule for predicting the course of events, and as a guide to the choice of a course of action. This idea of cause and effect is the most potent factor in developing the history of the human race, as of the individual.

In no realm of nature is the principle of cause and effect more conspicuous than in astronomy; and we fall into the habit of thinking of its laws as not only being unchangeable in our universe, but necessary to the conception of any universe that might have been substituted in its place. The first inhabitants of the world were compelled to accommodate their acts to the daily and annual alternations of light and darkness and of heat and cold, as much as to the irregular changes of weather, attacks of disease, and the fortune of war. They soon came to regard the influence of the sun, in connection with light and heat, as a cause. This led to a search for other signs in the heavens. If the appearance of a comet was sometimes noted simultaneously with the death of a great ruler, or an eclipse with a scourge of plague, these might well be looked upon as causes in the same sense that the veering or backing of the wind is regarded as a cause of fine or foul weather.

For these reasons we find that the earnest men of all ages have recorded the occurrence of comets, eclipses, new stars, meteor showers, and remarkable conjunctions of the planets, as well as plagues and famines, floods and droughts, wars and the deaths of great rulers. Sometimes they thought they could trace connections which might lead them to say that a comet presaged famine, or an eclipse war.

Even if these men were sometimes led to evolve laws of cause and effect which now seem to us absurd, let us be tolerant, and gratefully acknowledge that these astrologers, when they suggested such "working hypotheses," were laying the foundations of observation and deduction.

If the ancient Chaldæans gave to the planetary conjunctions an influence over terrestrial events, let us remember that in our own time people have searched for connection between terrestrial conditions and periods of unusual prevalence of sun spots; while De la Rue, Loewy, and Balfour Stewart[1] thought they found a connection between sun-spot displays and the planetary positions. Thus we find scientific men, even in our own time, responsible for the belief that storms in the Indian Ocean, the fertility of German vines, famines in India, and high or low Nile-floods in Egypt follow the planetary positions....