History and Practice of the Art of Photography 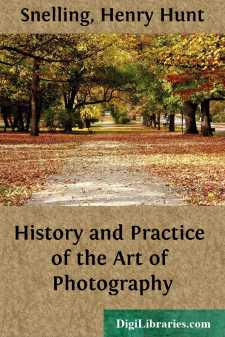 CHAP. I. A BRIEF HISTORY OF THE ART.

As in all cases of great and valuable inventions in science and art the English lay claim to the honor of having first discovered that of Photogenic drawing. But we shall see in the progress of this history, that like many other assumptions of their authors, priority in this is no more due them, then the invention of steamboats, or the cotton gin.

This claim is founded upon the fact that in 1802 Mr. Wedgwood recorded an experiment in the Journal of the Royal Institution of the following nature.

"A piece of paper, or other convenient material, was placed upon a frame and sponged over with a solution of nitrate of silver; it was then placed behind a painting on glass and the light traversing the painting produced a kind of copy upon the prepared paper, those parts in which the rays were least intercepted being of the darkest hues. Here, however, terminated the experiment; for although both Mr. Wedgwood and Sir Humphry Davey experimented carefully, for the purpose of endeavoring to fix the drawings thus obtained, yet the object could not be accomplished, and the whole ended in failure."

This, by their own showing, was the earliest attempt of the English savans. But this much of the principle was known to the Alchemists at an early date--although practically produced in another way--as the following experiment, to be found in old books, amply proves.

"Dissolve chalk in aquafortis to the consistence of milk, and add to it a strong solution of silver; keep this liquor in a glass bottle well stopped; then cutting out from a piece of paper the letters you would have appear, paste it on the decanter, and lay it in the sun's rays in such a manner that the rays may pass through the spaces cut out of the paper and fall on the surface of the liquor the part of the glass through which the rays pass will be turned black, while that under the paper remains white; but particular care must be observed that the bottle be not moved during the operation."

Had not the alchemists been so intent upon the desire to discover the far famed philosopher's stone, as to make them unmindful of the accidental dawnings of more valuable discoveries, this little experiment in chemistry might have induced them to prosecute a more thorough search into the principle, and Photogenic art would not now, as it is, be a new one.

It is even asserted that the Jugglers of India were for many ages in possession of a secret by which they were enabled, in a brief space, to copy the likeness of any individual by the action of light. This fact, if fact it be, may account for the celebrated magic mirrors said to be possessed by these jugglers, and probable cause of their power over the people.

However, as early as 1556 the fact was established that a combination of chloride and silver, called, from its appearance, horn silver, was blackened by the sun's rays; and in the latter part of the last century Mrs. Fulhame published an experiment by which a change of color was effected in the chloride of gold by the agency of light; and gave it as her opinion that words might be written in this way....