History and Ecclesiastical Relations of the Churches of the Presbyterial Order at Amoy, China 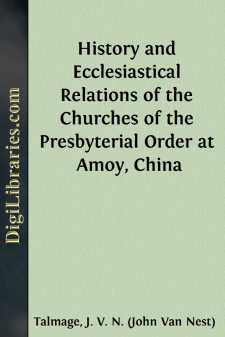 HISTORY AND ECCLESIASTICAL RELATIONS OF THE CHURCHES OF THE PRESBYTERIAL ORDER, AT AMOY, CHINA.

Bishop Boone soon left Amoy, and no others of his Church have since then been stationed there. The American Presbyterian Mission was removed to other parts of China. At the present time there are three Missions at Amoy, viz.: the Missions of the American Reformed Dutch Church, of the London Missionary Society, and of the English Presbyterian Church.

The first Missionary of the English Presbyterian Church at Amoy was Dr. Jas. Young. He arrived in May, 1850. At that time there were two Missionaries connected with our (R.D.C.) Mission, viz.: Rev. E. Doty, on the ground, and Rev. J.V.N. Talmage, absent on a visit to the United States. There were then under our care six native church members. Five of them had been baptized by our Missionaries at Amoy. The other had been baptized in Siam, by a Congregationalist or Presbyterian Minister of the A.B.C.F.M.

Dr. Young, being a physician, and not an ordained Minister, instead of commencing an independent work, inasmuch as our doctrines and order of church government did not essentially differ from those of his own Church, very naturally became more especially associated with us in our work. A school under the care of our Mission, of which Mr. Doty did not feel able to continue the charge, was passed over to his care. He also rendered medical assistance to the Missionaries, and to the Chinese, both in Amoy, and by occasional tours in the country. In his labors he was usually assisted by native Christians under our care.

The first ordained Missionary of the English Presbyterian Church, at Amoy, was Rev. William C. Burns. He joined Dr. Young in July, 1851. While he rendered considerable assistance to the brethren of the London Missionary Society, being ready to preach the gospel at every opportunity, providentially he became especially associated with us, and with the native Christians under our care. A remarkable outpouring of the Spirit of God had accompanied the labors of Rev. Mr. Burns, in his native land. So the remarkable outpouring of that same Spirit in Amoy, and vicinity, occurred sometime after his arrival, and much of this good work was manifestly connected with his labors. The permanent work in the country around Amoy commenced through his instrumentality, in connection with native members of the church under our care....