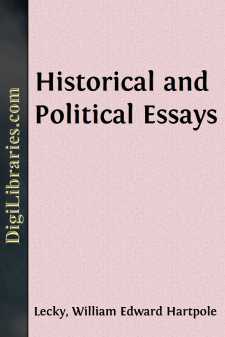 I do not propose in this paper to enter into any general inquiry about the best method of writing history. Such inquiries appear to me to be of no real value, for there are many different kinds of history which should be written in many different ways. A diplomatic, a military, or a parliamentary history, dealing with a short period or a particular episode, must evidently be treated in a very different spirit from an extended history where the object of the historian should be to describe the various aspects of the national life, and to trace through long periods of time the ultimate causes of national progress and decay. The history of religion, of art, of literature, of social and industrial development, of scientific progress, have all their different methods. A writer who treats of some great revolution that has transformed human affairs should deal largely in retrospect, for the most important part of his task is to explain the long course of events that prepared and produced the catastrophe; while a writer who treats of more normal times will do well to plunge rapidly into his theme.

Historians, too, differ widely in their special talents, and these talents are never altogether combined. The power of vividly realising and portraying men, or societies or modes of thought that have long since passed away; the power of arranging and combining great multitudes of various facts; the power of judging with discrimination, accuracy, and impartiality conflicting arguments or evidence; the power of tracing through the long course of events the true chain of cause and effect, selecting the facts that are most valuable and significant and explaining the relation between general causes and particular effects, are all very different and belong to different types of mind. It is idle to expect a writer with the gifts of a Clarendon, a Kinglake, or a Froude to write history in the spirit of a Hallam or a Grote. Writers who are eminently distinguished for wide, patient, and accurate research have sometimes little power either of describing or interpreting the facts which they collect. All that can be said with any profit is that each writer will do best if he follows the natural bent of his genius, and that he should select those kinds or periods of history in which his special gifts have most scope and the qualities in which he is deficient are least needed.

It is the fashion of a modern school of historical writers to deplore what they call the intrusion of literature into history. History, in their judgment, should be treated as science and not as literature, and the kind of intellect they most value is not unlike that of a skilful and well-trained attorney. To collect documents with industry; to compare, classify, interpret and estimate them is the main work of the historian. It is no doubt true that there are some fields of history where the primary facts are so little known, so much contested or so largely derived from recondite manuscript sources, that a faithful historian will be obliged in justice to his readers to sacrifice both proportion and artistic charm to the supreme importance of analysing evidence, reproducing documents and accumulating proofs; but in general the depreciation of the literary element in history seems to me essentially wrong....