Historic Papers on the Causes of the Civil War 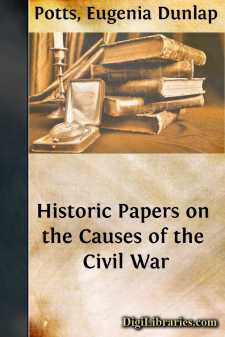 No pen or brush can picture life in the old Southern States in the ante-bellum days. The period comprehends two hundred and fifty years of history without a parallel. A separate and distinct civilization was there represented, the like of which can never be reproduced. Socially, intellectually, politically and religiously, she stood pre-eminent, among nations. It was the spirit of the cavalier that created and sustained our greatness. Give the Puritan his due, and still the fact remains. The impetus that led to freedom from Great Britain, came from the South. A Southern General led the ragged Continentals on to victory. Southern jurists and Southern statesmanship guided the councils of wisdom. The genius of war pervaded her people. She gave presidents, cabinet officers, commanders, tacticians and strategists. Her legislation extended the country's territory from the Atlantic to the Pacific.

A writer aptly says: "For more than fifty formative years of our history the Old South was the dominating power in the nation, as it had been in the foundation of the colonies out of which came the Republic, and later in fighting its battles of independence and in forming its policies of government. * * * Whatever of strength or symmetry the republic had acquired at home, or reputation it had achieved abroad, in those earlier crucial days of its history, was largely due to the patriotism and ability of Southern statesmanship. Why that scepter of leadership has passed from its keeping, or why the New South is no longer at the front of national leadership, is a question that might well give pause to one who recalls the brave days when the Old South sat at the head of the table and directed the affairs of the nation."

There was the manor and there was the cabin. Each head of the house was a potentate in his own domain—an absolute ruler of a principality as marked as in feudal times, without the despotism of the feudal system.

The plantation of the old regime was tastefully laid out for beauty and productiveness. Flower gardens and kitchen gardens stretched away into the magnificence of orange trees, shady avenues and fruitful plants. Unbroken retreats of myrtle and laurel and tropical foliage, bantered the sun to do his worst. Flowers perfumed the air; magnolia bloom and other rich tree flora regaled the senses; extensive orchards yielded fruit of all kinds adapted to the soil and climate; vineyards were heavy with much bearing. Fields were carefully cultivated, till such a thing as the failure of crops was almost unknown. It was largely supplied with sheep and their wool, with geese, ducks, turkeys, guinea fowls, and every variety of poultry without stint. Eggs were gathered by the bushel, myriads of birds clouded the sun, and daily intoxicated their little brains with the juice of the black cherry. Herds of cattle were luxuriously pastured by Pompey and his sable mates....