Historic China, and other sketches 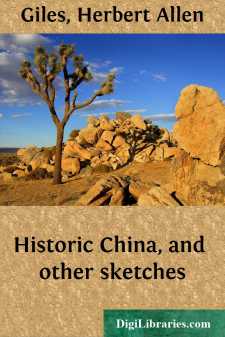 THE DEATH OF AN EMPEROR

His Imperial Majesty, Tsai-Shun, deputed by Heaven to reign over all within the four seas, expired on the evening of Tuesday the 13th January 1875, aged eighteen years and nine months. He was erroneously known to foreigners as the Emperor T'ung Chih; but T'ung Chih was merely the style of his reign, adopted in order that the people should not profane by vulgar utterance a name they are not even permitted to write.[*] Until the new monarch, the late Emperor's cousin, had been duly installed, no word of what had taken place was breathed beyond the walls of the palace; for dangerous thoughts might have arisen had it been known that the State was drifting rudderless, a prey to the wild waves of sedition and lawless outbreak. The accession of a child to reign under the style of Kuang Hsu was proclaimed before it was publicly made known that his predecessor had passed away.

[*] Either one or all of the characters composing an emperor's nameare altered by the addition or omission of certain componentparts; as if, for instance, we were to write an Albart chainmerely because Albert is the name of the heir-apparent.Similarly, a child will never utter or write its father's name;and the names of Confucius and Mencius are forbidden to all alike.

Of the personal history of the ill-fated boy who has thus been prematurely cut off just as he was entering upon manhood and the actual government of four hundred million souls, we know next to nothing. His accession as an infant to the dignities of a sensual, dissipated father, attracted but little attention either in China or elsewhere; and from that date up to the year 1872, all we heard about His Majesty was, that he was making good progress in Manchu, or had hit the target three times out of ten shots at a distance of about twenty-five yards. He was taught to ride on horseback, though up to the day of his death he never took part in any great hunting expeditions, such as were frequently indulged in by earlier emperors of the present dynasty. He learnt to read and write Chinese, though what progress he had made in the study of the Classics was of course only known to his teachers. Painting may or may not have been an Imperial hobby; but it is quite certain that the drama received more perhaps than its full share of patronage. The ladies and eunuchs of the palace are notoriously fond of whiling away much of their monotonous existence in watching the grave antics of professional tragedians and laughing at the broad jokes of the low-comedy man, with his comic voice and funnily-painted face. Listening to the tunes prescribed by the Book of Ceremonies, and dining in solemn solitary grandeur off the eight[*] precious kinds of food set apart for the sovereign, his late Majesty passed his boyhood, until in 1872 he married the fair A-lu-te, and practically ascended the dragon throne of his ancestors. Up to that time the Empresses-Dowager, hidden behind a bamboo screen, had transacted business with the members of the Privy Council, signing all documents of State with the vermilion pencil for and on behalf of the young Emperor, but probably without even going through the formality of asking his assent....