Historic Boys Their Endeavours, Their Achievements, and Their Times 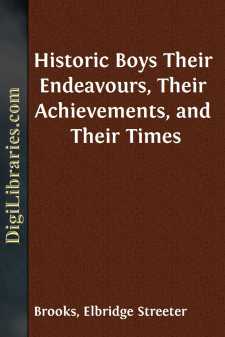 MARCUS OF ROME: THE BOY MAGISTRATE.

A perfect autumn day. Above, the clear sky of Italy; below, a grassy plain, sloping gently down from the brown cliffs and ruined ramparts of old Veii—the city of the ancient Tuscan kings. In the background, under the shade of the oaks, a dozen waiting attendants; and here, in the open space before us, three trim and sturdy Roman youths, all flushed with the exercise of a royal game of ball. Come, boys and girls of to-day, go back with me seventeen and a half centuries, and join the dozen lookers-on as they follow this three-cornered game of ball. They call it the trigon. It is a favorite ball-game with the Roman youth, in which the three players, standing as if on a right-angled triangle, pitch and catch the ball, or pila, at long distances and with the left hand only. It is not so easy as you may think. Try it some time and see for yourself.

"This way—toss it this way, Aufidius; our good Sejus will need more lessons from old Trimalchio, the gladiator, ere he outranks us at trigon."

And with a quick but guarded dash of the left hand the speaker caught the ball as it came spinning toward him, and with as vigorous a "left-hander" sent it flying across to young Sejus.

"Faith, my Marcus," said Sejus, as he caught the ball with difficulty, "the gallop from Lorium has made me somewhat stiff of joint, and I pitch and catch but poorly. Keep the pila flying, and I may grow more elastic, though just now I feel much like our last text from Epictetus, that the good Rusticus gave us yesterday—'a little soul bearing about a corpse.'"

"What then! Art as stiff as that, old Sejus?" gayly shouted Aufidius. "Ho! brace thee up, man," he cried, as he sent the ball whirling across to Marcus; "brace thee up, and use rather the words of our wise young Stoic here—'Be like the promontory against which the waves continually break, but it stands firm and tames the fury of the waters around it.'"

"'T is well applied, Aufidius. But—said I all that?" Marcus inquired.

"Ay, so didst thou, my Marcus. 'T is all down on my tablets." And with merry talk the game went on.

But soon old Ballio, the ordinarius, or upper servant, left the oak shade and said to Marcus: "Come, my master; the water-glass shows that we must soon ride on if we mean to reach Rome by dinner-time."

So the game was broken off, and, after a few nibbles at the cakes and sweetmeats which one of the slaves carried to "stay the stomachs" of the travellers, the call "To horse!" was given, and the party moved on toward the city. The spirits of the lads ran high; and though the one called Marcus had a sedate and quiet look, he was roused into healthy and hearty boyishness as, over the Etruscan plains, they galloped on to Rome.

They had been riding, perhaps, a short half hour, when they saw, coming down a cross-road that entered the highway just beyond them, a large flock of sheep returning from their summer pasturage on the hills, in charge of three shepherds and their families....