Hispanic Nations of the New World; a chronicle of our southern neighbors 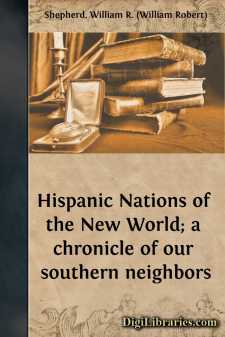 CHAPTER I. THE HERITAGE FROM SPAIN AND PORTUGAL

At the time of the American Revolution most of the New World still belonged to Spain and Portugal, whose captains and conquerors had been the first to come to its shores. Spain had the lion's share, but Portugal held Brazil, in itself a vast land of unsuspected resources. No empire mankind had ever yet known rivaled in size the illimitable domains of Spain and Portugal in the New World; and none displayed such remarkable contrasts in land and people. Boundless plains and forests, swamps and deserts, mighty mountain chains, torrential streams and majestic rivers, marked the surface of the country. This vast territory stretched from the temperate prairies west of the Mississippi down to the steaming lowlands of Central America, then up through tablelands in the southern continent to high plateaus, miles above sea level, where the sun blazed and the cold, dry air was hard to breathe, and then higher still to the lofty peaks of the Andes, clad in eternal snow or pouring fire and smoke from their summits in the clouds, and thence to the lower temperate valleys, grassy pampas, and undulating hills of the far south.

Scattered over these vast colonial domains in the Western World were somewhere between 12,000,000 and 19,000,000 people subject to Spain, and perhaps 3,000,000, to Portugal; the great majority of them were Indians and negroes, the latter predominating in the lands bordering on the Caribbean Sea and along the shores of Brazil. Possibly one-fourth of the inhabitants came of European stock, including not only Spaniards and their descendants but also the folk who spoke English in the Floridas and French in Louisiana.

During the centuries which had elapsed since the entry of the Spaniards and Portuguese into these regions an extraordinary fusion of races had taken place. White, red, and black had mingled to such an extent that the bulk of the settled population became half-caste. Only in the more temperate regions of the far north and south, where the aborigines were comparatively few or had disappeared altogether, did the whites remain racially distinct. Socially the Indian and the negro counted for little. They constituted the laboring class on whom all the burdens fell and for whom advantages in the body politic were scant. Legally the Indian under Spanish rule stood on a footing of equality with his white fellows, and many a gifted native came to be reckoned a force in the community, though his social position remained a subordinate one. Most of the negroes were slaves and were more kindly treated by the Spaniards than by the Portuguese.

Though divided among themselves, the Europeans were everywhere politically dominant. The Spaniard was always an individualist. Besides, he often brought from the Old World petty provincial traditions which were intensified in the New. The inhabitants of towns, many of which had been founded quite independently of one another, knew little about their remote neighbors and often were quite willing to convert their ignorance into prejudice: The dweller in the uplands and the resident on the coast were wont to view each other with disfavor....