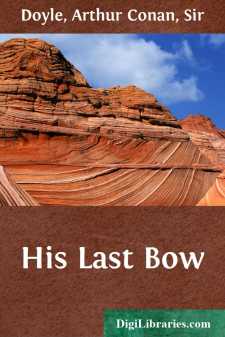 It was nine o'clock at night upon the second of August--the most terrible August in the history of the world. One might have thought already that God's curse hung heavy over a degenerate world, for there was an awesome hush and a feeling of vague expectancy in the sultry and stagnant air. The sun had long set, but one blood-red gash like an open wound lay low in the distant west. Above, the stars were shining brightly, and below, the lights of the shipping glimmered in the bay. The two famous Germans stood beside the stone parapet of the garden walk, with the long, low, heavily gabled house behind them, and they looked down upon the broad sweep of the beach at the foot of the great chalk cliff in which Von Bork, like some wandering eagle, had perched himself four years before. They stood with their heads close together, talking in low, confidential tones. From below the two glowing ends of their cigars might have been the smouldering eyes of some malignant fiend looking down in the darkness.

A remarkable man this Von Bork--a man who could hardly be matched among all the devoted agents of the Kaiser. It was his talents which had first recommended him for the English mission, the most important mission of all, but since he had taken it over those talents had become more and more manifest to the half-dozen people in the world who were really in touch with the truth. One of these was his present companion, Baron Von Herling, the chief secretary of the legation, whose huge 100-horse-power Benz car was blocking the country lane as it waited to waft its owner back to London.

"So far as I can judge the trend of events, you will probably be back in Berlin within the week," the secretary was saying. "When you get there, my dear Von Bork, I think you will be surprised at the welcome you will receive. I happen to know what is thought in the highest quarters of your work in this country." He was a huge man, the secretary, deep, broad, and tall, with a slow, heavy fashion of speech which had been his main asset in his political career.

"They are not very hard to deceive," he remarked. "A more docile, simple folk could not be imagined."

"I don't know about that," said the other thoughtfully. "They have strange limits and one must learn to observe them. It is that surface simplicity of theirs which makes a trap for the stranger. One's first impression is that they are entirely soft. Then one comes suddenly upon something very hard, and you know that you have reached the limit and must adapt yourself to the fact. They have, for example, their insular conventions which simply MUST be observed."

"Meaning 'good form' and that sort of thing?" Von Bork sighed as one who had suffered much.

"Meaning British prejudice in all its queer manifestations. As an example I may quote one of my own worst blunders--I can afford to talk of my blunders, for you know my work well enough to be aware of my successes. It was on my first arrival. I was invited to a week-end gathering at the country house of a cabinet minister. The conversation was amazingly indiscreet."

Von Bork nodded. "I've been there," said he dryly.

"Exactly. Well, I naturally sent a resume of the information to Berlin. Unfortunately our good chancellor is a little heavy-handed in these matters, and he transmitted a remark which showed that he was aware of what had been said. This, of course, took the trail straight up to me. You've no idea the harm that it did me. There was nothing soft about our British hosts on that occasion, I can assure you. I was two years living it down. Now you, with this sporting pose of yours--"

"No, no, don't call it a pose. A pose is an artificial thing. This is quite natural. I am a born sportsman. I enjoy it."

"Well, that makes it the more effective. You yacht against them, you hunt with them, you play polo, you match them in every game, your four-in-hand takes the prize at Olympia. I have even heard that you go the length of boxing with the young officers....