Hills and the Sea 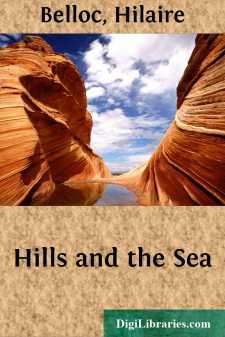 There were once two men. They were men of might and breeding. They were young, they were intolerant, they were hale. Were there for humans as there is for dogs a tribunal to determine excellence; were there judges of anthropoidal points and juries to, give prizes for manly race, vigour, and the rest, undoubtedly these two men would have gained the gold and the pewter medals. They were men absolute.

From this last proceeded in them both a great knowledge of truth and a defence of it, to the tedium of their friends: a demotion to the beauty of women and of this world; an outspoken hatred of certain things and men, and, alas! a permanent sadness also. All these things the gods gave them in the day when the decision was taken upon Olympus that these two men should not profit by any great good except Friendship, and that all their lives through Necessity should jerk her bit between their teeth, and even at moments goad their honour.

The high gods, which are names only to the multitude, visited these men. Dionysus came to them with all his company once, at dawn, upon the Surrey hills, and drove them in his car from a suburb whose name I forget right out into the Weald. Pallas Athene taught them by word of mouth, and the Cytherean was their rosy, warm, unfailing friend. Apollo loved them. He bestowed upon them, under his own hand the power not only of remembering all songs, but even of composing light airs of their own; and Pan, who is hairy by nature and a lurking fellow afraid of others, was reconciled to their easy comradeship, and would accompany them into the mountains when they were remote from mankind. Upon these occasions he revealed to them the life of trees and the spirits that haunt the cataracts, so that they heard voices calling where no one else had ever heard them, and that they saw stones turned into animals and men.

Many things came to them in common. Once in the Hills, a thousand miles from home, when they had not seen men for a very long time, Dalua touched them with his wing, and they went mad for the space of thirty hours. It was by a stream in a profound gorge at evening and under a fretful moon. The next morning they lustrated themselves with water, and immediately they were healed....