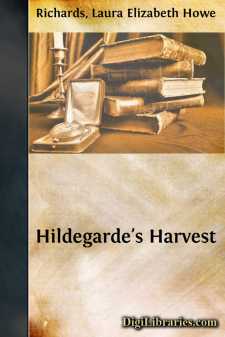 Hildegarde was walking home from the village, whither she had gone to get the mail. She usually rode the three miles on her bicycle, but she had met a tack on the road the day before, and must now wait a day or two till the injured tire could be mended.

Save for missing the sensation of flying, which she found one of the most delightful things in the world, she was hardly sorry to have the walk. One could not see so much from the wheel, unless one rode slowly; and Hildegarde could not ride slowly,—the joy of flying was too great. It was good to look at everything as she went along, to recognise the knots on the trees, and stop for a friendly word with any young sapling that looked as if it needed encouragement. Also, the leaves had fallen, and what could be pleasanter than to walk through them, stirring them up, and hearing the crisp, clean crackle of them under her feet? Also,—and this was the most potent reason, after all,—she could read her letters as she walked, and she had good letters to-day.

The first that she opened was addressed in a round, childish hand to "Mis' Hilda," the "Grahame" being added in a different hand. The letter itself was written in pencil, and read as follows:

"I hop you are well. I am well. Aunt Wealthy is well. Martha is well. Dokta jonSon is well; these are all the peple that is well. Germya has the roomatiks so bad he sase he thinks he is gon this time for sure. I don't think he is gon, he has had them wers before. Aunt Wealthy gave me a bantim cock and hens, his nam is Goliath of Gath, and there nams is Buty and Topknot. The children has gon away from Joyus Gard; they were all well and they went home to scool. I miss them; I go to scool, but I don't lik it, but I am gone to have tee with Mista Peny pakr tonite, Aunt Wealthy sade I mite. He has made a new hous and it is nise.

Hildegarde laughed a good deal over this letter, and then wiped away a tear or two that certainly had no business in her happy eyes.

"Dear little Benny!" she said. "Dear little boy! But when is the precious lamb going to learn to spell? This is really dreadful! I suppose 'Germya' is Jeremiah, though it looks more like some new kind of porridge. And Mr. Pennypacker with a new house! This is astonishing! I must see what Cousin Wealthy says about it."

The next letter, bearing the same postmark, of Bywood, and written in a delicate and tremulous hand, was from Miss Bond herself. It told Hildegarde in detail the news that Benny had outlined; described the happy departure of the children, who had spent their convalescence at the pleasant summer home, all rosy-cheeked, and shouting over the joy they had had. Then she went on to dilate on the wonderful qualities of her adopted son Benny, who, it appeared, was making progress in every branch of education.

"I may be prejudiced, my dear," the good old lady wrote, "but I am bound to say that Martha agrees with me in thinking him a most remarkable child."

Miss Bond further told of the event of the neighbourhood, the building of Mr....