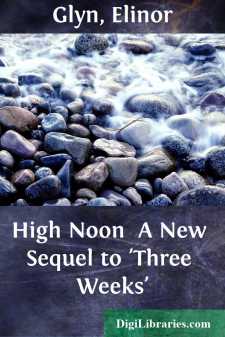 t was Springtime in Switzerland! Once more the snow-capped mountains mirrored their proud heads in sapphire lakes; and on the beeches by the banks of Lake Lucerne green buds were bursting into leaves. Everywhere were bright signs of the earth's awakening. Springtime in Switzerland! And that, you know—you young hearts to whom the gods are kind—is only another way of saying Paradise!

Towards Paradise, then, thundered the afternoon express from Paris, bearing the advance guard of the summer seekers after happiness. But if the cumbrous coaches carried swiftly onward some gay hearts, some young lovers to never-to-be-forgotten scenes, one there was among the throng to whom the world was gray—an English gentleman this, who gazed indifferently upon the bright vistas flitting past his window. The London Times reposed unopened by his side; Punch, Le Figaro, Jugend had pleased him not and tumbled to the floor unnoticed.

There seemed scant reason for such deep abstraction in one who bore the outward signs of so vigorous a manhood. Tall, well-formed, muscular as his faultless clothes half revealed, half hid, his bronzed face bearing the clear eyes and steady lips of a man much out of doors, this thoughtful Englishman was indeed a man to catch and hold attention. No callow youth, was he, but in the prime of life—strong, clean, distinguished in appearance, with hair slightly silvered at the temples; a man who had lived fully, women would have said, but who was now a bit weary of the world.

Small wonder that the smart American girl sitting opposite in the compartment stared at him with frank interest, or an elegantly gowned Parisienne demi-mondaine (travelling incognito as the Comtesse de Boistelle) eyed him tentatively through her lorgnette.

So Sir Paul Verdayne sat that afternoon in a compartment of the through express, all unconscious of the scrutiny of his fellow travellers; his heart filled with the dogged determination to face the future and make the best of it like a true Englishman; somewhat saddened—yes—but still unbroken in spirit by the sorrows that had been his.

Many years ago it was, since he had vowed to revisit the Springplace of his youth, Lucerne, a spot so replete with tender memories, and each succeeding year had found him making anew his pilgrimage, though a sombre warp of sorrow was now interwoven in the golden woof of his young happiness.

This year he had decided should be the last. Not that his devotion to his beloved Queen had lessened—far from that—but the latent spirit of action, so innate to true British blood was slowly reasserting itself. For Paul romance might still remain, but as a thing now past. He was frank with himself in this respect, and he would be frank with Isabella Waring too.

One more visit he would pay to the scenes of his love-idyl, to the place where his beloved Imperatorskoye had come into his life, there to commune again with her in spirit, there to feel her regal presence, to seek from her that final supreme consolation which his wounded heart craved—this was Paul's quest....