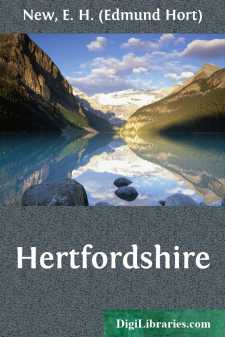 INTRODUCTION I. Situation, Extent and Boundaries

Hertfordshire, or Herts, is a county in the S.E. of England. On the S. it is bounded by Middlesex; on the S.W. by Buckinghamshire; on the N.W. by Bedfordshire; on the N. by Cambridgeshire; on the E. by Essex. Its extreme measurement from due E. to W., say from Little Hyde Hall to Puttenham, is about 38 miles; from N. to S., from Mobb’s Hole at the top of Ashwell Common to a point just S. of Totteridge Green, about 30 miles; but a longer line, 36 miles in length, may be drawn from Mobb’s Hole to Troy Farm in the S.W. Its boundaries are very irregular; the neighbourhood of Long Marston is almost surrounded by Buckinghamshire and Bedfordshire, that of Hinxworth by Cambridgeshire and Bedfordshire, and that of Barnet by Middlesex. Its extreme points are:—

Its area is 404,523 acres or 632 square miles. It is one of the smallest counties in England, the still smaller counties being Rutland, Middlesex, Huntingdon, Bedford and Monmouth. Hertfordshire is one of the six home counties.

Hertfordshire, being an inland county, is naturally devoid of many charms to be found in those counties which have a sea-coast. But it has beauties of its own, being particularly varied and undulating. Its scenery is pleasantly diversified by many woods, which however are mostly of but small extent, by swelling cornfields, and by several small and winding streams. There is much rich loam in the many little valley-bottoms traversed by these streams, and other loams of inferior quality are found in abundance on the higher levels of the arable districts. The soil in many parts, owing to the preponderance of chalk, is specially adapted to the cultivation of wheat. Its trees have elicited the admiration of many, particularly its oaks and elms, of which colossal specimens are found here and there throughout the county, and its beeches, of which the beautiful woods on the Chiltern slopes and elsewhere in the W. are largely composed. The hornbeam is almost restricted to Essex and Hertfordshire. The woods of Hertfordshire form indeed its sweetest attraction in the eyes of many. The districts of Rickmansworth, Radlett, Wheathampstead and Breachwood Green, among others, are dotted with coppices of ideal loveliness, and larger woods such as Batch Wood near St. Albans and Bricket Wood near Watford are carpeted with flowers in their season, interspersed with glades, and haunted by jays and doves, by ringlets and brimstones. Hazel woods abound, and parties of village children busily “a-nutting” in the autumn are one of the commonest sights of the county. It abounds, too, in quiet park-like spots which are the delight of artists, and contains many villages and hamlets picturesquely situated upon slopes and embowered among trees. A large proportion of the birds known to English observers are found in the county either regularly or as chance visitors, and will be treated more fully in a separate section....