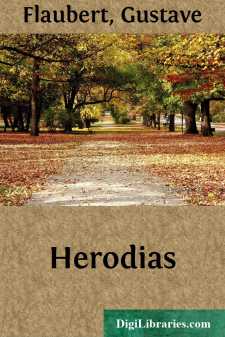 In the eastern side of the Dead Sea rose the citadel of Machaerus. It was built upon a conical peak of basalt, and was surrounded by four deep valleys, one on each side, another in front, and the fourth in the rear. At the base of the citadel, crowding against one another, a group of houses stood within the circle of a wall, whose outlines undulated with the unevenness of the soil. A zigzag road, cutting through the rocks, joined the city to the fortress, the walls of which were about one hundred and twenty cubits high, having numerous angles and ornamental towers that stood out like jewels in this crown of stone overhanging an abyss.

Within the high walls stood a palace, adorned with many richly carved arches, and surrounded by a terrace that on one side of the building spread out below a wide balcony made of sycamore wood, upon which tall poles had been erected to support an awning.

One morning, just before sunrise, the tetrarch, Herod-Antipas, came out alone upon the balcony. He leaned against one of the columns and looked about him.

The crests of the hill-tops in the valley below the palace were just discernible in the light of the false dawn, although their bases, extending to the abyss, were still plunged in darkness. A light mist floated in the air; presently it lifted, and the shores of the Dead Sea became visible. The sun, rising behind Machaerus, spread a rosy flush over the sky, lighting up the stony shores, the hills, and the desert, and illuming the distant mountains of Judea, rugged and grey in the early dawn. En-gedi, the central point of the group, threw a deep black shadow; Hebron, in the background, was round-topped like a dome; Eschol had her pomegranates, Sorek her vineyards, Carmel her fields of sesame; and the tower of Antonia, with its enormous cube, dominated Jerusalem. The tetrarch turned his gaze from it to contemplate the palms of Jericho on his right; and his thoughts dwelt upon other cities of his beloved Galilee,—Capernaum, Endor, Nazareth, Tiberias—whither it might be he would never return.

The Jordan wound its way through the arid plains that met his gaze; white and glittering under the clear sky, it dazzled the eye like snow in the rays of the sun.

The Dead Sea now looked like a sheet of lapis-lazuli; and at its southern extremity, on the coast of Yemen, Antipas recognised clearly what at first he had been able only dimly to perceive. Several tents could now be plainly seen; men carrying spears were moving about among a group of horses; and dying camp-fires shone faintly in the beams of the rising sun.

This was a troop belonging to the sheikh of the Arabs, the daughter of whom the tetrarch had repudiated in order to wed Herodias, already married to one of his brothers, who lived in Italy but who had no pretensions to power.

Antipas was waiting for assistance and reinforcements from the Romans, but as Vitellius, the Governor of Syria, had not yet arrived, he was consumed with impatience and anxiety. Perhaps Agrippa had ruined his cause with the Emperor, he thought....