Hereward, the Last of the English 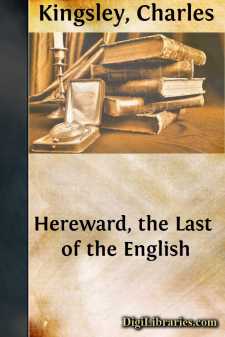 The heroic deeds of Highlanders, both in these islands and elsewhere, have been told in verse and prose, and not more often, nor more loudly, than they deserve. But we must remember, now and then, that there have been heroes likewise in the lowland and in the fen. Why, however, poets have so seldom sung of them; why no historian, save Mr. Motley in his "Rise of the Dutch Republic," has condescended to tell the tale of their doughty deeds, is a question not difficult to answer.

In the first place, they have been fewer in number. The lowlands of the world, being the richest spots, have been generally the soonest conquered, the soonest civilized, and therefore the soonest taken out of the sphere of romance and wild adventure, into that of order and law, hard work and common sense, as well as—too often—into the sphere of slavery, cowardice, luxury, and ignoble greed. The lowland populations, for the same reasons, have been generally the first to deteriorate, though not on account of the vices of civilization. The vices of incivilization are far worse, and far more destructive of human life; and it is just because they are so, that rude tribes deteriorate physically less than polished nations. In the savage struggle for life, none but the strongest, healthiest, cunningest, have a chance of living, prospering, and propagating their race. In the civilized state, on the contrary, the weakliest and the silliest, protected by law, religion, and humanity, have chance likewise, and transmit to their offspring their own weakliness or silliness. In these islands, for instance, at the time of the Norman Conquest, the average of man was doubtless superior, both in body and mind, to the average of man now, simply because the weaklings could not have lived at all; and the rich and delicate beauty, in which the women of the Eastern Counties still surpass all other races in these isles, was doubtless far more common in proportion to the numbers of the population.

Another reason—and one which every Scot will understand—why lowland heroes "carent vate sacro," is that the lowlands and those who live in them are wanting in the poetic and romantic elements. There is in the lowland none of that background of the unknown, fantastic, magical, terrible, perpetually feeding curiosity and wonder, which still remains in the Scottish highlands; which, when it disappears from thence, will remain embalmed forever in the pages of Walter Scott. Against that half-magical background his heroes stand out in vivid relief; and justly so. It was not put there by him for stage purposes; it was there as a fact; and the men of whom he wrote were conscious of it, were moulded by it, were not ashamed of its influence. Nature among the mountains is too fierce, too strong, for man. He cannot conquer her, and she awes him. He cannot dig down the cliffs, or chain the storm-blasts; and his fear of them takes bodily shape: he begins to people the weird places of the earth with weird beings, and sees nixes in the dark linns as he fishes by night, dwarfs in the caves where he digs, half-trembling, morsels of copper and iron for his weapons, witches and demons on the snow-blast which overwhelms his herd and his hut, and in the dark clouds which brood on the untrodden mountain-peak....