Heralds of Empire Being the Story of One Ramsay Stanhope, Lieutenant to Pierre Radisson in the Northern Fur Trade 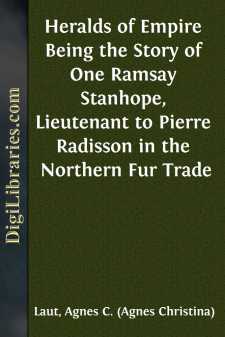 CHAPTER I WHAT ARE KING-KILLERS?

My father—peace to his soul!—had been of those who thronged London streets with wine tubs to drink the restored king's health on bended knee; but he, poor gentleman, departed this life before his monarch could restore a wasted patrimony. For old Tibbie, the nurse, there was nothing left but to pawn the family plate and take me, a spoiled lad in his teens, out to Puritan kin of Boston Town.

On the night my father died he had spoken remorsefully of the past to the lord bishop at his bedside.

"Tush, man, have a heart," cries his lordship. "Thou'lt see pasch and yule yet forty year, Stanhope. Tush, man, 'tis thy liver, or a touch of the gout. Take here a smack of port. Sleep sound, man, sleep sound."

And my father slept so sound he never wakened more.

So I came to my Uncle Kirke, whose virtues were of the acid sort that curdles the milk of human kindness.

With him, goodness meant gloom. If the sweet joy of living ever sang to him in his youth, he shut his ears to the sound as to siren temptings, and sternly set himself to the fierce delight of being miserable.

For misery he had reason enough. Having writ a book in which he called King Charles "a man of blood and everlasting abomination"—whatever that might mean—Eli Kirke got himself star-chambered. When, in the language of those times, he was examined "before torture, in torture, between torture, and after torture"—the torture of the rack and the thumbkins and the boot—he added to his former testimony that the queen was a "Babylonish woman, a Potiphar, a Jezebel, a—"

There his mouth was gagged, head and heels roped to the rack, and a wrench given the pulleys at each end that nigh dismembered his poor, torn body. And what words, think you, came quick on top of his first sharp outcry?

"Wisdom is justified of her children! The wicked shall he pull down and the humble shall he exalt!"

And when you come to think of it, Charles Stuart lost his head on the block five years from that day.

When Eli Kirke left jail to take ship for Boston Town both ears had been cropped. On his forehead the letters S L—seditious libeler—were branded deep, though not so deep as the bitterness burned into his soul.

There comes before me a picture of my landing, showing as clearly as it were threescore years ago that soft, summer night, the harbour waters molten gold in a harvest moon, a waiting group of figures grim above the quay. No firing of muskets and drinking of flagons and ringing of bells to welcome us, for each ship brought out court minions to whip Boston into line with the Restoration—as hungry a lot of rascals as ever gathered to pick fresh bones.

Old Tibbie had pranked me out in brave finery: the close-cut, black-velvet waistcoat that young royalists then wore; a scarlet doublet, flaming enough to set the turkey yard afire; the silken hose and big shoe-buckles late introduced from France by the king; and a beaver hat with plumes a-nodding like my lady's fan. My curls, I mind, tumbled forward thicker than those foppish French perukes....