Her Own Way A Play in Four Acts 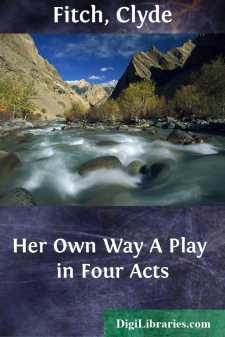 The nursery. Half-past two in the afternoon. A cool, delightful white room, with a frieze of children playing in the ocean spray; shelves of bright-colored books on the walls, and the months of a large calendar by Elizabeth Shippen Green framed underneath. There is a deep bow-window at the back; the principal door is at the Left, and a smaller one on the Right. Toys of all sizes, for all ages, are scattered about with a holiday air. There is a sofa on the Right and a hobby horse on the Left.

There are four charming though somewhat spoiled children, with intermittent manners, with napkins tied up under their chins, sitting around the table, which is a little to the right of the centre of the room.

The Footman is busy removing the plates; the butler, Moles, who stands behind Philip, always takes Philip's plate. It is Philip's birthday. Lizzie stands behind Elaine. In the centre of the table is a large cake with seven candles burning on it.

Philip. What comes next?

Philip. What comes next, Moles?

Philip. Who cares! It's my birthday!

Christopher. When will it be my birthday?

[The Footman reënters with plates, followed by Moles, with silver dish of croquettes.

Philip. Here it comes; what is it?

Lizzie. And besides, Miss Elaine is company.

Philip. That's all right. S'long it's Elaine, everything goes!

[Sliding down from her chair, she runs to him and kisses him.

Philip. [Hopelessly embarrassed.] Don't! not in front of everybody!

Elaine. But I do love you, Phil, and you're my beau, and I'm so glad it's your birthday.

[Goes back to her place unashamed and contented.

Lizzie. You oughtn't to talk about beaux at your age, Miss—ought Miss Elaine?

[To Moles with a knowing glance.

Moles. I ain't discussing the sex with you, Lizzie, but I will say all the girls I've known, began talking about beaux early and ended late.

[Footman goes out with the croquette dish.

Lizzie. [Indignant, though convulsed.] I never did!

Philip. Yes, you did! To Maggie when you thought I wasn't paying attention.

Elaine. But Mr. Coast's your auntie's cousin; and your cousin can't be your beau.

Philip. He ain't any relation to Auntie Georgiana. Mamma said so. Mr. Coast's mamma's cousin, and grandma's nephew, but grandma isn't any real relation to auntie.

Philip. I don't know how, only Aunt Georgiana had a different mamma, she didn't have grandma.

Elaine. And the same papa!

Philip. Not all the time, mamma had another papa first.

Christopher. It's sort of mixy, isn't it?

Philip. Yes, I guess mamma and Aunt Georgy are sort of divorced sisters!

[As if that explained it.