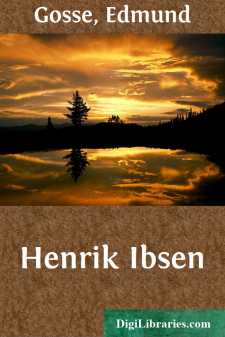 CHAPTER I CHILDHOOD AND YOUTH

The parentage of the poet has been traced back to a certain Danish skipper, Peter Ibsen, who, in the beginning of the eighteenth century, made his way over from Stege, the capital of the island of Möen, and became a citizen of Bergen. From that time forth the men of the family, all following the sea in their youth, jovial men of a humorous disposition, continued to haunt the coasts of Norway, marrying sinister and taciturn wives, who, by the way, were always, it would seem, Danes or Germans or Scotswomen, so that positively the poet had, after a hundred years and more of Norwegian habitation, not one drop of pure Norse blood to inherit from his parents. His grandfather, Henrik, was wrecked in 1798 in his own ship, which went down with all souls lost on Hesnaes, near Grimstad; this reef is the scene of Ibsen's animated poem of Terje Viken. His father, Knud, who was born in 1797, married in 1825 a German, Marichen Cornelia Martie Altenburg, of the same town of Skien; she was one year his senior, and the daughter of a merchant. It was in 1771 that the Ibsens, leaving Bergen, had settled in Skien, which was, and still is, an important centre of the timber and shipping trades on the south-east shore of the country.

It may be roughly said that Skien, in the Danish days, was a sort of Poole or Dartmouth, existing solely for purposes of marine merchandise, and depending for prosperity, and life itself, on the sea. Much of a wire-drawn ingenuity has been conjectured about the probable strains of heredity which met in Ibsen. It is not necessary to do more than to recognize the slight but obstinate exoticism, which kept all his forbears more or less foreigners still in their Norwegian home; and to insist on the mixture of adventurousness and plain common sense which marked their movements by sea and shore. The stock was intensely provincial, intensely unambitious; it would be difficult to find anywhere a specimen of the lower middle class more consistent than the Ibsens had been in preserving their respectable dead level. Even in that inability to resist the call of the sea, generation after generation, if there was a little of the dare-devil there was still more of the conventional citizen. It is, in fact, a vain attempt to detect elements of his ancestors in the extremely startling and unprecedented son who was born to Knud and Marichen Ibsen two years and three months after their marriage.

This son, who was baptized Henrik Johan, although he never used the second name, was born in a large edifice known as the Stockmann House, in the centre of the town of Skien, on March 20, The house stood on one side of a large, open square; the town pillory was at the right of and the mad-house, the lock-up and other amiable urban institutions to the left; in front was Latin school and the grammar school, while the church occupied the middle of the square. Over this stern prospect the tourist can no longer sentimentalize, for the whole of this part of Skien was burned down in 1886, to the poet's unbridled satisfaction....