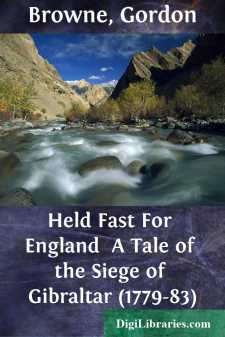 The Siege of Gibraltar stands almost alone in the annals of warfare, alike in its duration and in the immense preparations made, by the united powers of France and Spain, for the capture of the fortress. A greater number of guns were employed than in any operation up to that time; although in number, and still more in calibre, the artillery then used have in, modern times, been thrown into the shade by the sieges of Sebastopol and Paris. Gibraltar differs, however, from these sieges, inasmuch as the defence was a successful one and, indeed, at no period of the investment was the fortress in any danger of capture, save by hunger.

At that period England was not, as she afterwards became, invincible by sea; and as we were engaged at the same time in war with France, Spain, Holland, and the United States, it was only occasionally that a fleet could be spared to bring succour and provisions to the beleaguered garrison. Scurvy was the direst enemy of the defenders. The art of preserving meat in tins had not been discovered, and they were forced to subsist almost entirely upon salt meat. During the first year of the siege the supply of fresh vegetables was scanty, in the extreme, and the garrison consequently suffered so severely, from scurvy, that at one time scarcely half of the men of the garrison were strong enough to carry a firelock, and perform their duty. The providential capture of a vessel laden with oranges and lemons checked the ravages of the scourge; and the successful efforts of the garrison to raise vegetables prevented it from ever, afterwards, getting a firm hold upon them.

In such a siege there was but little scope for deeds of individual gallantry. It was a long monotony of hardship and suffering, nobly endured, and terminating in one of the greatest triumphs ever recorded in the long roll of British victories.

Had Mr. Tulloch, the headmaster and proprietor of a large school at Putney, been asked which was the most troublesome boy in his school, he would probably have replied, without hesitation, "Bob Repton."

But, being a just and fair-minded man, he would have hastened to qualify this remark, by adding:

"Most troublesome, but by no means the worst boy. You must understand that. He is always in scrapes, always in mischief. In all my experience I have never before come across a boy who had such an aptitude for getting into trouble; but I have nothing else to say against him. He is straightforward and manly. I have never known him to tell a lie, to screen himself. He is an example to many others in that way. I like the boy, in spite of the endless trouble he gives, and yet there is scarcely a day passes that I am not obliged to cane him; and even that does him no good, as far as I can see, for he seems to forget it, five minutes after it is over. I wonder, sometimes, if he has really got hardened, and doesn't feel it.

"He is sharp, and does his lessons well. I have no difficulty with him, on that score; but he is a perfect imp of mischief."

With such characteristics, it need hardly be said that Bob Repton was one of the most popular boys at Tulloch's school....