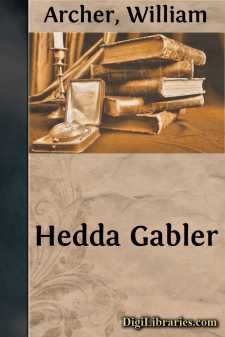 From Munich, on June 29, 1890, Ibsen wrote to the Swedish poet, Count Carl Soilsky: "Our intention has all along been to spend the summer in the Tyrol again. But circumstances are against our doing so. I am at present engaged upon a new dramatic work, which for several reasons has made very slow progress, and I do not leave Munich until I can take with me the completed first draft. There is little or no prospect of my being able to complete it in July." Ibsen did not leave Munich at all that season. On October 30 he wrote: "At present I am utterly engrossed in a new play. Not one leisure hour have I had for several months." Three weeks later (November 20) he wrote to his French translator, Count Prozor: "My new play is finished; the manuscript went off to Copenhagen the day before yesterday.... It produces a curious feeling of emptiness to be thus suddenly separated from a work which has occupied one's time and thoughts for several months, to the exclusion of all else. But it is a good thing, too, to have done with it. The constant intercourse with the fictitious personages was beginning to make me quite nervous." To the same correspondent he wrote on December 4: "The title of the play is Hedda Gabler. My intention in giving it this name was to indicate that Hedda, as a personality, is to be regarded rather as her father's daughter than as her husband's wife. It was not my desire to deal in this play with so-called problems. What I principally wanted to do was to depict human beings, human emotions, and human destinies, upon a groundwork of certain of the social conditions and principles of the present day."

So far we read the history of the play in the official "Correspondence."(A) Some interesting glimpses into the poet's moods during the period between the completion of The Lady from the Sea and the publication of Hedda Gabler are to be found in the series of letters to Fraulein Emilie Bardach, of Vienna, published by Dr. George Brandes.(B) This young lady Ibsen met at Gossensass in the Tyrol in the autumn of 1889. The record of their brief friendship belongs to the history of The Master Builder rather than to that of Hedda Gabler, but the allusions to his work in his letters to her during the winter of 1889 demand some examination.

So early as October 7, 1889, he writes to her: "A new poem begins to dawn in me. I will execute it this winter, and try to transfer to it the bright atmosphere of the summer. But I feel that it will end in sadness—such is my nature." Was this "dawning" poem Hedda Gabler? Or was it rather The Master Builder that was germinating in his mind? Who shall say? The latter hypothesis seems the more probable, for it is hard to believe that at any stage in the incubation of Hedda Gabler he can have conceived it as even beginning in gaiety. A week later, however, he appears to have made up his mind that the time had not come for the poetic utilisation of his recent experiences. He writes on October 15: "Here I sit as usual at my writing-table. Now I would fain work, but am unable to. My fancy, indeed, is very active. But it always wanders away ours. I cannot repress my summer memories—nor do I wish to. I live through my experience again and again and yet again. To transmute it all into a poem, I find, in the meantime, impossible." Clearly, then, he felt that his imagination ought to have been engaged on some theme having no relation to his summer experiences—the theme, no doubt, of Hedda Gabler. In his next letter, dated October 29, he writes: "Do not be troubled because I cannot, in the meantime, create (dichten). In reality I am for ever creating, or, at any rate, dreaming of something which, when in the fulness of time it ripens, will reveal itself as a creation (Dichtung)." On November 19 he says: "I am very busily occupied with preparations for my new poem. I sit almost the whole day at my writing-table. Go out only in the evening for a little while." The five following letters contain no allusion to the play; but on September 18, 1890, he wrote: "My wife and son are at present at Riva, on the Lake of Garda, and will probably remain there until the middle of October, or even longer. Thus I am quite alone here, and cannot get away. The new play on which I am at present engaged will probably not be ready until November, though I sit at my writing-table daily, and almost the whole day long."

Here ends the history of Hedda Gabler, so far as the poet's letters carry us. Its hard clear outlines, and perhaps somewhat bleak atmosphere, seem to have resulted from a sort of reaction against the sentimental "dreamery" begotten of his Gossensass experiences....