Heart of the Sunset 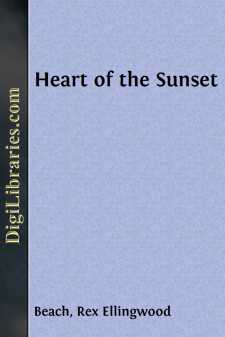 A fitful breeze played among the mesquite bushes. The naked earth, where it showed between the clumps of grass, was baked plaster hard. It burned like hot slag, and except for a panting lizard here and there, or a dust-gray jack-rabbit, startled from its covert, nothing animate stirred upon its face. High and motionless in the blinding sky a buzzard poised; long-tailed Mexican crows among the thorny branches creaked and whistled, choked and rattled, snored and grunted; a dove mourned inconsolably, and out of the air issued metallic insect cries—the direction whence they came as unascertainable as their source was hidden.

Although the sun was half-way down the west, its glare remained untempered, and the tantalizing shade of the sparse mesquite was more of a trial than a comfort to the lone woman who, refusing its deceitful invitation, plodded steadily over the waste. Stop, indeed, she dared not. In spite of her fatigue, regardless of the torture from feet and limbs unused to walking, she must, as she constantly assured herself, keep going until strength failed. So far, fortunately, she had kept her head, and she retained sufficient reason to deny the fanciful apprehensions which clamored for audience. If she once allowed herself to become panicky, she knew, she would fare worse—far worse—and now, if ever, she needed all her faculties. Somewhere to the northward, perhaps a mile, perhaps a league distant, lay the water-hole.

But the country was of a deadly and a deceitful sameness, devoid of landmarks and lacking well-defined water-courses. The unending mesquite with its first spring foliage resembled a limitless peach-orchard sown by some careless and unbelievably prodigal hand. Out of these false acres occasional knolls and low stony hills lifted themselves so that one came, now and then, to vantage-points where the eye leaped for great distances across imperceptible valleys to horizons so far away that the scattered tree-clumps were blended into an unbroken carpet of green. To the woman these outlooks were unutterably depressing, merely serving to reveal the vastness of the desolation about her.

At the crest of such a rise she paused and studied the country carefully, but without avail. She felt dizzily for the desert bag swung from her shoulder, only to find it flat and dry; the galvanized mouthpiece burned her fingers. With a little shock she remembered that she had done this very thing several times before, and her repeated forgetting frightened her, since it seemed to show that her mind had been slightly unbalanced by the heat. That perhaps explained why the distant horizon swam and wavered so.

In all probability a man situated as she was would have spoken aloud, in an endeavor to steady himself; but this woman did nothing of the sort. Seating herself in the densest shade she could find—it was really no shade at all—she closed her eyes and relaxed—no easy thing to do in such a stifling temperature and when her throat was aching with drought....