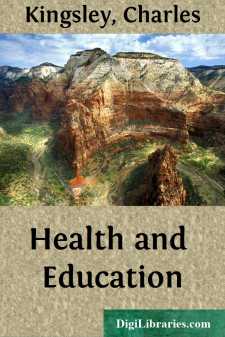 THE SCIENCE OF HEALTH

Whether the British race is improving or degenerating?  What, if it seem probably degenerating, are the causes of so great an evil?  How they can be, if not destroyed, at least arrested?—These are questions worthy the attention, not of statesmen only and medical men, but of every father and mother in these isles.  I shall say somewhat about them in this Essay; and say it in a form which ought to be intelligible to fathers and mothers of every class, from the highest to the lowest, in hopes of convincing some of them at least that the science of health, now so utterly neglected in our curriculum of so-called education, ought to be taught—the rudiments of it at least—in every school, college, and university.

We talk of our hardy forefathers; and rightly.  But they were hardy, just as the savage is usually hardy, because none but the hardy lived.  They may have been able to say of themselves—as they do in a state paper of 1515, now well known through the pages of Mr. Froude—“What comyn folk of all the world may compare with the comyns of England, in riches, freedom, liberty, welfare, and all prosperity?  What comyn folk is so mighty, and so strong in the felde, as the comyns of England?”  They may have been fed on “great shins of beef,” till they became, as Benvenuto Cellini calls them, “the English wild beasts.”  But they increased in numbers slowly, if at all, for centuries.  Those terrible laws of natural selection, which issue in “the survival of the fittest,” cleared off the less fit, in every generation, principally by infantile disease, often by wholesale famine and pestilence; and left, on the whole, only those of the strongest constitutions to perpetuate a hardy, valiant, and enterprising race.

At last came a sudden and unprecedented change.  In the first years of the century, steam and commerce produced an enormous increase in the population.  Millions of fresh human beings found employment, married, brought up children who found employment in their turn, and learnt to live more or less civilised lives.  An event, doubtless, for which God is to be thanked.  A quite new phase of humanity, bringing with it new vices and new dangers: but bringing, also, not merely new comforts, but new noblenesses, new generosities, new conceptions of duty, and of how that duty should be done.  It is childish to regret the old times, when our soot-grimed manufacturing districts were green with lonely farms.  To murmur at the transformation would be, I believe, to murmur at the will of Him without whom not a sparrow falls to the ground.

“The old order changeth, yielding place to the new,And God fulfils himself in many ways,Lest one good custom should corrupt the world.”

Our duty is, instead of longing for the good old custom, to take care of the good new custom, lest it should corrupt the world in like wise.  And it may do so thus:—

The rapid increase of population during the first half of this century began at a moment when the British stock was specially exhausted; namely, about the end of the long French war.  There may have been periods of exhaustion, at least in England, before that.  There may have been one here, as there seems to have been on the Continent, after the Crusades; and another after the Wars of the Roses.  There was certainly a period of severe exhaustion at the end of Elizabeth’s reign, due both to the long Spanish and Irish wars and to the terrible endemics introduced from abroad; an exhaustion which may have caused, in part, the national weakness which hung upon us during the reign of the Stuarts.  But after none of these did the survival of the less fit suddenly become more easy; or the discovery of steam power, and the acquisition of a colonial empire, create at once a fresh demand for human beings and a fresh supply of food for them.  Britain, at the beginning of the nineteenth century, was in an altogether new social situation....