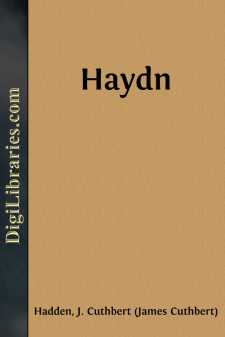 Haydn's position, alike in music and in musical biography, is almost unique. With the doubtful exception of Sebastian Bach, no composer of the first rank ever enjoyed a more tranquil career. Bach was not once outside his native Germany; Haydn left Austria only to make those visits to England which had so important an influence on the later manifestations of his genius: His was a long, sane, sound, and on the whole, fortunate existence. For many years he was poor and obscure, but if he had his time of trial, he never experienced a time of failure. With practical wisdom he conquered the Fates and became eminent. A hard, struggling youth merged into an easy middle-age, and late years found him in comfortable circumstances, with a solid reputation as an artist, and a solid retiring-allowance from a princely patron, whose house he had served for the better part of his working career. Like Goethe and Wordsworth, he lived out all his life. He was no Marcellus, shown for one brief moment and "withdrawn before his springtime had brought forth the fruits of summer." His great contemporary, Mozart, cut off while yet his light was crescent, is known to posterity only by the products of his early manhood. Haydn's sun set at the end of a long day, crowning his career with a golden splendour whose effulgence still brightens the ever-widening realm of music.

Voltaire once said of Dante that his reputation was becoming greater and greater because no one ever read him. Haydn's reputation is not of that kind. It is true that he may not appeal to what has been called the "fevered modern soul," but there is an old-world charm about him which is specially grateful in our bustling, nerve-destroying, bilious age. He is still known as "Papa Haydn," and the name, to use Carlyle's phrase, is "significant of much." In the history of the art his position is of the first importance. He was the father of instrumental music. He laid the foundations of the modern symphony and sonata, and established the basis of the modern orchestra. Without him, artistically speaking, Beethoven would have been impossible. He seems to us now a figure of a very remote past, so great have been the changes in the world of music since he lived. But his name will always be read in the golden book of classical music; and whatever the evolutionary processes of the art may bring, the time can hardly come when he will be forgotten, his works unheard.

Franz Joseph Haydn was born at the little market-town of Rohrau, near Prugg, on the confines of Austria and Hungary, some two-and-a-half hours' railway journey from Vienna....