Have We No Rights? A frank discussion of the "rights" of missionaries 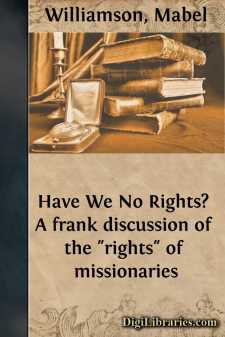 "Well," said mother, setting down a cup she had just wiped, and picking up another, "the older I get, and the older my children get, the more I realize how little right a person has even to her own children. By the time they get—well—into high school they aren't yours any more."

"But, Mother," I protested, dropping a dripping dishcloth into the dishpan and looking at her in amazement, "of course we are yours! Whose else would we be?"

There was silence for a moment. Then, "You—you belong to yourselves," she said quietly.

America—the land of freedom and opportunity! The land where everyone's rights are respected! The land where the son of a shiftless drunkard can grit his teeth and say, "I'm going to be rich and famous some day!" Here in America we pride ourselves on the fact that everyone has the right to live his own life as he pleases—provided, that is, that he does not infringe upon the rights of someone else.

Rights—your rights; my rights. Just what are rights, anyway?

A group of half a dozen missionaries were gathered for prayer in a simply furnished living room of a mission house in China. For a few minutes one of the group spoke to us out of his heart, and I shall never forget the gist of what he said.

"You know," he began, "there's a great deal of difference between eating bitterness [Chinese idiom for 'suffering hardship'] and eating loss [Chinese idiom for 'suffering the infringement of one's rights']. 'Eating bitterness' is easy enough. To go out with the preaching band, walk twenty or thirty miles to the place where you are to work, help set up the tent, placard the town with posters, and spend several weeks in a strenuous campaign of meetings and visitation—why, that's a thrill! Your bed may be made of a couple of planks laid on sawhorses, and you may have to eat boiled rice, greens, and beancurd three times a day. But that's just the beauty of it! Why, it's good for anyone to go back to the simple life! A little healthy 'bitterness' is good for anybody!

"When I came to China," he continued, "I was all ready to 'eat bitterness' and like it. That hasn't troubled me particularly. It takes a little while to get your palate and your digestion used to Chinese food, of course, but that was no harder than I had expected. Another thing, however"—and he paused significantly—"another thing that I had never thought about came up to make trouble. I had to 'eat loss'! I found that I couldn't stand up for my rights—that I couldn't even have any rights. I found that I had to give them up, every one, and that was the hardest thing of all."