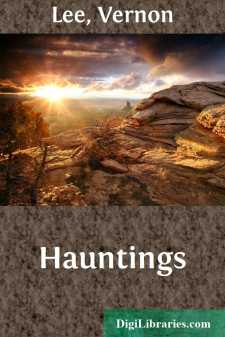 We were talking last evening—as the blue moon-mist poured in through the old-fashioned grated window, and mingled with our yellow lamplight at table—we were talking of a certain castle whose heir is initiated (as folk tell) on his twenty-first birthday to the knowledge of a secret so terrible as to overshadow his subsequent life. It struck us, discussing idly the various mysteries and terrors that may lie behind this fact or this fable, that no doom or horror conceivable and to be defined in words could ever adequately solve this riddle; that no reality of dreadfulness could seem caught but paltry, bearable, and easy to face in comparison with this vague we know not what.

And this leads me to say, that it seems to me that the supernatural, in order to call forth those sensations, terrible to our ancestors and terrible but delicious to ourselves, skeptical posterity, must necessarily, and with but a few exceptions, remain enwrapped in mystery. Indeed, 'tis the mystery that touches us, the vague shroud of moonbeams that hangs about the haunting lady, the glint on the warrior's breastplate, the click of his unseen spurs, while the figure itself wanders forth, scarcely outlined, scarcely separated from the surrounding trees; or walks, and sucked back, ever and anon, into the flickering shadows.

A number of ingenious persons of our day, desirous of a pocket-superstition, as men of yore were greedy of a pocket-saint to carry about in gold and enamel, a number of highly reasoning men of semi-science have returned to the notion of our fathers, that ghosts have an existence outside our own fancy and emotion; and have culled from the experience of some Jemima Jackson, who fifty years ago, being nine years of age, saw her maiden aunt appear six months after decease, abundant proof of this fact. One feels glad to think the maiden aunt should have walked about after death, if it afforded her any satisfaction, poor soul! but one is struck by the extreme uninterestingness of this lady's appearance in the spirit, corresponding perhaps to her want of charm while in the flesh. Altogether one quite agrees, having duly perused the collection of evidence on the subject, with the wisdom of these modern ghost-experts, when they affirm that you can always tell a genuine ghost-story by the circumstance of its being about a nobody, its having no point or picturesqueness, and being, generally speaking, flat, stale, and unprofitable.

A genuine ghost-story! But then they are not genuine ghost-stories, those tales that tingle through our additional sense, the sense of the supernatural, and fill places, nay whole epochs, with their strange perfume of witchgarden flowers.

No, alas! neither the story of the murdered King of Denmark (murdered people, I am told, usually stay quiet, as a scientific fact), nor of that weird woman who saw King James the Poet three times with his shroud wrapped ever higher; nor the tale of the finger of the bronze Venus closing over the wedding-ring, whether told by Morris in verse patterned like some tapestry, or by Mérimée in terror of cynical reality, or droned by the original mediaeval professional story-teller, none of these are genuine ghost-stories....