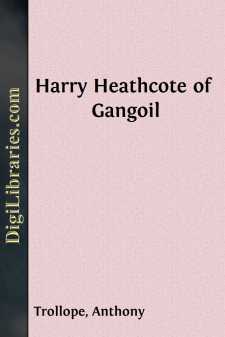 Just a fortnight before Christmas, 1871, a young man, twenty-four years of age, returned home to his dinner about eight o'clock in the evening. He was married, and with him and his wife lived his wife's sister. At that somewhat late hour he walked in among the two young women, and another much older woman who was preparing the table for dinner. The wife and the wife's sister each had a child in her lap, the elder having seen some fifteen months of its existence, and the younger three months. "He has been out since seven, and I don't think he's had a mouthful," the wife had just said. "Oh, Harry, you must be half starved," she exclaimed, jumping up to greet him, and throwing her arm round his bare neck.

"I'm about whole melted," he said, as he kissed her. "In the name of charity give me a nobbler. I did get a bit of damper and a pannikin of tea up at the German's hut; but I never was so hot or so thirsty in my life. We're going to have it in earnest this time. Old Bates says that when the gum leaves crackle, as they do now, before Christmas, there won't be a blade of grass by the end of February."

"I hate Old Bates," said the wife. "He always prophesies evil, and complains about his rations."

The young man who had just returned home had on a flannel shirt, a pair of mole-skin trowsers, and an old straw hat, battered nearly out of all shape. He had no coat, no waistcoat, no braces, and nothing round his neck. Round his waist there was a strap or belt, from the front of which hung a small pouch, and, behind, a knife in a case. And stuck into a loop in the belt, made for the purpose, there was a small brier-wood pipe. As he dashed his hat off, wiped his brow, and threw himself into a rocking-chair, he certainly was rough to look at, but by all who understood Australian life he would have been taken to be a gentleman. He was a young squatter, well known west of the Mary River, in Queensland. Harry Heathcote of Gangoil, who owned 30,000 sheep of his own, was a magistrate in those parts, and able to hold his own among his neighbors, whether rough or gentle; and some neighbors he had, very rough, who made it almost necessary that a man should be able to be rough also, on occasions, if he desired to live among them without injury. Heathcote of Gangoil could do all that. Men said of him that he was too imperious, too masterful, too much inclined to think that all things should be made to go as he would have them. Young as he was, he had been altogether his own master since he was of age—and not only his own master, but the master also of all with whom he was brought into contact from day to day....