Harriet and the Piper 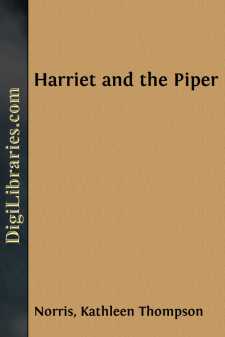 Richard Carter had called the place "Crownlands," not to please himself, or even his wife. But it was to his mother's newly born family pride that the idea of being the Carters of Crownlands made its appeal. The estate, when he bought it, had belonged to a Carter, and the tradition was that two hundred years before it had been a grant of the first George to the first of the name in America. Madame Carter, as the old lady liked to be called, immediately adopted the unknown owner into a vague cousinship, spoke of him as "a kinsman of ours," and proceeded to tell old friends that Crownlands had always been "in the family."

It was a home hardly deserving of the pretentious name, although it was beautiful enough, and spacious enough, for notice, even among the magnificent neighbours that surrounded it. It was of creamy brick, colonial in design, and set in splendid lawns and great trees on the bank of the blue Hudson. White driveways circled it, great stables and garages across a curve of green meadows had their own invisible domain, and on the shining highway there was a full mile of high brick fence, a marching line of great maples and sycamores, and a demure lodge beside the mighty iron gates.

Much of this was as Richard Carter had found it five years ago, but about the house, inside and out, his wife had made changes, had lent the place something of her own individuality and charm. It was Isabelle Carter who had visualized the window-boxes and the awnings, the walks where emerald grass spouted between the bricks, the terrace with its fat balustrade and shallow marble steps descending to the river. Great stone jars, spilling the brilliant scarlet of geraniums, flanked the steps, and the shadows of the mighty trees fell clear and sharp across the marble. And on a soft June afternoon, sitting in the silence and the fragrance with boats plying up and down the river, and birds twittering and flashing at the brim of the fountain, one might have dreamed one's self in some forgotten Italian garden rather than a short two hours' trip away from the busiest and most congested city of the world.

On one of the wide benches that were placed here and there on the descending terraces, in the late hours of an exquisite summer afternoon, a man and a woman were sitting. They had strolled slowly from the tennis court, where half-a-dozen young persons were violently exercising themselves in the sunshine, with the vague intention of reaching the tea table, on the upper level. But here, in the clear shade, Isabelle Carter had suddenly seated herself, and Anthony Pope, her cavalier, had thrown himself on the steps at her feet.

She was a woman worthy of the exquisite setting, and in her richly coloured gown, against the clear cream of the marble, the new green of the trees and lawns, and the brilliant hues of the flowers, she might well have turned an older head than that of the boy beside her. Brunette, with smooth cheeks deeply touched with rose, black eyes, and a warmly crimson mouth that could be at once provocative and relentless, she glowed like a flower herself in the sweet and enervating heat of the summer's first warm day....