Happy Little Edward And His Pleasant Ride and Rambles in the Country. 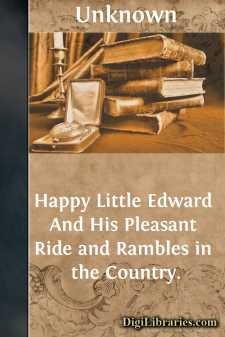 Edward Jones was about four years old. He was a good, and of course a happy little boy, and he lived in a beautiful city in Connecticut, with his kind parents, and his brothers and sisters, and a dear good aunt, who took care of him.

Edward's mother had a sister living in Massachusetts, who was the wife of a farmer, and one beautiful Spring morning, Mr. and Mrs. Jones determined to pay her a visit, and to take Edward with them.

The little fellow was much pleased to hear this, you may be sure; and when the carriage drove up to the door, he could hardly wait for aunt Mary to dress him, comb his hair, and get him ready for the journey.

At first Edward's attention was taken up with the motion of the carriage, and the sight of the horses, as they rode swiftly on their journey; but after a while he began to notice the different objects which presented themselves, as the road led through the green woods, and on the banks of the broad river, or swept by the pretty villages which lay in their route.

About noon they stopped at a retired and shady spot on the banks of the river, to give the horses time to get a little rest and refreshment.

So Edward and his mother seated themselves on the green bank; and she let him take off his cap and dip his fingers in the clear bright stream, which she told him was running to swell the waters of the great ocean. It was a lovely day; the air was full of the sweet scent of the early flowers, and the grass was green and bright with the freshness of Spring.

"What is that running up the tree, mother?" asked Edward; "see what bright quick eyes it has, and a bushy tail;—there he goes, mother!"

"That is a squirrel, my dear; a brown squirrel. They are not all like this one. There are black and gray squirrels; and in some very cold countries, white ones. But hark! my son; what sound is that?"

Edward listened, and heard something like the sound of a little hammer against a tree. He ran into the wood, and there he saw a little bird knocking with its bill against the trunk of a tree, just as if it wanted some one to open the door! Soon he saw it draw out of the bark of the tree, a little worm, which hung upon the end of its tongue as if it had been a hook! His mother told him this little bird, was called a woodpecker, and this was the way it took its food.

Edward's father now put him in the carriage, and they proceeded on their journey. For the first few miles Edward could think of nothing but the squirrel, the bird, and the pleasant spot where he had been looking at them. Then he began to think of the friends he was going to see, and wondered what his cousins would say, and how they would look when they saw him.

A short time before sunset, they stopped before a neat and pretty cottage, with a large yard before it; in which two rosy boys and a sweet little girl were playing together.

"There, Edward," said his mother, "are your cousins, William, George, and Ann, all clapping their hands with joy at seeing us; and there is aunt Harriet just coming to the door with her baby in her arms."

Oh, what a joyful time these little cousins had....