Happy Jack and other Tales of the Sea 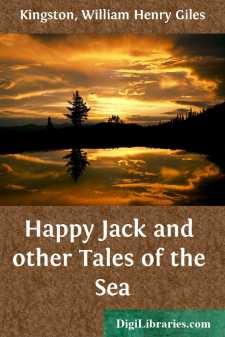 I go to sea in rather unromantic surroundings.

Have any of you made a passage on board a steamer between London and Leith? If you have, you will have seen no small number of brigs and brigantines, with sails of all tints, from doubtful white to decided black—some deeply-laden, making their way to the southward, others with their sides high out of the water, heeling over to the slightest breeze, steering north.

On board one of those delectable craft, a brig called the Naiad, I found myself when about fourteen summers had passed over my head. She must have been named after a negress naiad, for black was the prevailing colour on board, from the dark, dingy forecastle to the captain’s state cabin, which was but a degree less dirty than the portion of the vessel in which I was destined to live. The bulwarks, companion-hatch, and other parts had, to be sure, once upon a time been painted green, but the dust from the coal, which formed her usual cargo, had reduced every portion to one sombre hue, which even the salt seas not unfrequently breaking over her deck had failed to wash clean.

Captain Grimes, her commander, notwithstanding this, was proud of the old craft; and he especially delighted to tell how she had once carried a pennant when conveying troops to Corunna, or some other port in Spain.

I pitied the poor fellows confined to the narrow limits of her dark hold, redolent of bilge water and other foul odours. We, however, had not to complain on that score, for the fresh water which came in through her old sides by many a leak, and had to be pumped out every watch, kept her hold sweet.

I had made up my mind to go to sea—why, it’s hard to say, except that I thought I should like to knock about the world and see strange countries. I was happy enough at home, though I did not always make others happy. Nothing came amiss to me; I was always either laughing or singing, and do not recollect having an hour’s illness in my life. Now and then, by the elders of the family, and by Aunt Martha especially, I was voted a nuisance; and it was with no small satisfaction, at the end of the holidays, that they packed me off again to school. I was fond of my brothers and sisters, and they were fond of me, though I showed my affection for them in a somewhat rough fashion. I thought my sisters somewhat demure, and I was always teasing them and playing them tricks. Somehow or other I got the name among them and my brothers of “Happy Jack,” and certainly I was the merriest of the family. If I happened, which was not unfrequently the case, to get into a scrape, I generally managed to scramble out of it with flying colours; and if I did not, I laughed at the punishment to which I was doomed. I was a broad-shouldered, strongly-built boy, and could beat my elder brothers at running, leaping, or any other athletic exercise, while, without boasting, I was not behind any of them in the school-room. My father was somewhat proud of me, and had set his mind on my becoming a member of one of the learned professions, and rising to the top of the tree....