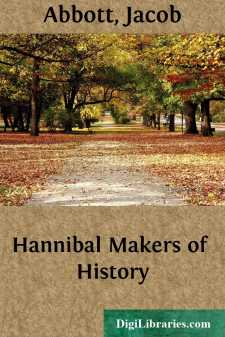 Hannibal was a Carthaginian general. He acquired his great distinction as a warrior by his desperate contests with the Romans. Rome and Carthage grew up together on opposite sides of the Mediterranean Sea. For about a hundred years they waged against each other most dreadful wars. There were three of these wars. Rome was successful in the end, and Carthage was entirely destroyed.

There was no real cause for any disagreement between these two nations. Their hostility to each other was mere rivalry and spontaneous hate. They spoke a different language; they had a different origin; and they lived on opposite sides of the same sea. So they hated and devoured each other.

Those who have read the history of Alexander the Great, in this series, will recollect the difficulty he experienced in besieging and subduing Tyre, a great maritime city, situated about two miles from the shore, on the eastern coast of the Mediterranean Sea. Carthage was originally founded by a colony from this city of Tyre, and it soon became a great commercial and maritime power like its mother. The Carthaginians built ships, and with them explored all parts of the Mediterranean Sea. They visited all the nations on these coasts, purchased the commodities they had to sell, carried them to other nations, and sold them at great advances. They soon began to grow rich and powerful. They hired soldiers to fight their battles, and began to take possession of the islands of the Mediterranean, and, in some instances, of points on the main land. For example, in Spain: some of their ships, going there, found that the natives had silver and gold, which they obtained from veins of ore near the surface of the ground. At first the Carthaginians obtained this gold and silver by selling the natives commodities of various kinds, which they had procured in other countries; paying, of course, to the producers only a very small price compared with what they required the Spaniards to pay them. Finally, they took possession of that part of Spain where the mines were situated, and worked the mines themselves. They dug deeper; they employed skillful engineers to make pumps to raise the water, which always accumulates in mines, and prevents their being worked to any great depth unless the miners have a considerable degree of scientific and mechanical skill. They founded a city here, which they called New Carthage—Nova Carthago. They fortified and garrisoned this city, and made it the center of their operations in Spain. This city is called Carthagena to this day.

Thus the Carthaginians did every thing by power of money. They extended their operations in every direction, each new extension bringing in new treasures, and increasing their means of extending them more. They had, besides the merchant vessels which belonged to private individuals, great ships of war belonging to the state....