Handbook of the Trees of New England 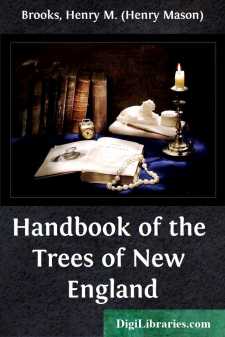 There is no lack of good manuals of botany in this country. There still seems place for an adequately illustrated book of convenient size for field use. The larger manuals, moreover, cover extensive regions and sometimes fail by reason of their universality to give a definite idea of plants as they grow within more limited areas. New England marks a meeting place of the Canadian and Alleghanian floras. Many southern plants, long after they have abandoned more elevated situations northward, continue to advance up the valleys of the Connecticut and Merrimac rivers, in which they ultimately disappear entirely or else reappear in the valley of the St. Lawrence; while many northern plants pushing southward maintain a more or less precarious existence upon the mountain summits or in the cold swamps of New England, and sometimes follow along the mountain ridges to the middle or southern states. In addition to these two floras, some southwestern and western species have invaded Vermont along the Champlain valley, and thrown out pickets still farther eastward.

At or near the limit of a species, the size and habit of plants undergo great change; in the case of trees, to which this book is restricted, often very noticeable. There is no fixed, absolute dividing line between trees and shrubs. In accordance with the usual definition, a tree must have a single trunk, unbranched at or near the base, and must be at least fifteen feet in height.

Trees that are native in New England, or native in other sections of the United States and thoroughly established in New England, are described and, for the most part, figured. Foreign trees, though locally established, are not figured. Trees may be occasionally spontaneous over a large area without really forming a constituent part of the flora. Even the apple and pear, when originating spontaneously and growing without cultivation, quickly become degenerate and show little tendency to possess themselves of the soil at the expense of the native growths. Gleditsia, for example, while clearly locally established, has with some hesitation been accorded pictorial representation.

All descriptions are based upon the habit of trees as they appear in New England, unless special mention is made to the contrary. The descriptions are designed to apply to trees as they grow in open land, with full space for the development of their characteristics under favorable conditions. In forest trees there is much greater uniformity; the trunks are more slender, taller, often unbranched to a considerable height, and the heads are much smaller.

When the trunk tapers uniformly from the ground upward, the given diameter is taken at the base; when the trunk is reinforced at the base, the measurements are made above the swell of the roots; when reinforced at the ground and also at the branching point, as often in the American elm, the measurements are made at the smallest place between the swell of the roots and of the branches.

A regular order has been followed in the description for the purpose of ready comparison. No explanation of the headings used seems necessary, except to state that the habitat is used in the more customary present acceptation to indicate the place where a plant naturally grows, as in swamps or upon dry hillsides. Under the head of "Horticultural Value," the requisite information is given for an intelligent choice of trees for ornamental purposes.

The order and names of families follow, in the main, Engler and Prantl. In accordance with the general tendency of New England botanists to conform to the best usage until an authoritative agreement has been reached with regard to nomenclature by an international congress, the Berlin rule has been followed for genera, and priority under the genus for species. Other names in use at the present day are given as synonyms and included in the index.

Only those common names are given which are actually used in some part of New England, whether or not the same name is applied to different trees. It seems best to record what is, and not what ought to be. Common names that are the creation of botanists have been disregarded altogether....