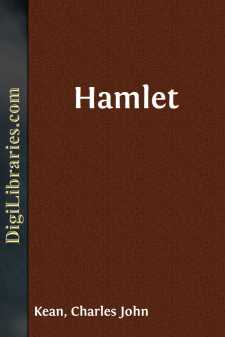 ACT I. Scene I.—ELSINORE. A Platform before the Castle. Night.

Francisco on his post. Enter to him Bernardo, L.H.

Fran. (R.) Nay, answer me: stand, and unfold yourself.

Fran. You come most carefully upon your hour.

Fran. For this relief much thanks: [Crosses to L.] 'tis bitter cold,

And I am sick at heart.

Ber. Have you had quiet guard?

Not a mouse stirring.

If you do meet Horatio and Marcellus,

The rivals of my watch, bid them make haste.

Fran. I think I hear them.—Stand, ho! Who's there?

Hor. Friends to this ground.

And liegemen to the Dane.

Fran. Give you good night.

Who hath reliev'd you?

Give you good night.

What, is Horatio there?

Hor. What, has this thing appear'd again to-night?

Ber. I have seen nothing.

And will not let belief take hold of him,

Touching this dreaded sight, twice seen of us:

Therefore I have entreated him, along

With us, to watch the minutes of this night;

That, if again this apparition come,

He may approve our eyes, and speak to it.

Ber. Come, let us once again assail your ears,

That are so fortified against our story,

What we two nights have seen.

Hor. Well, let us hear Bernardo speak of this.

Ber. Last night of all,

When yon same star that's westward from the pole

Had made his course to illume that part of heaven

Where now it burns, Marcellus, and myself,

The bell then beating one—

Mar. Peace, break thee off; look, where it comes again!

Ber. In the same figure, like the king that's dead.

Hor. Most like:—it harrows me with fear and wonder.

Ber. It would be spoke to.

Mar. Speak to it, Horatio.

Hor. What art thou, that usurp'st this time of night,

Together with that fair and warlike form

In which the majesty of buried Denmark

Did sometimes march? By heaven I charge thee, speak!

Mar. It is offended.

See! it stalks away!

Mar. 'Tis gone, and will not answer.

Ber. How now, Horatio! You tremble, and look pale:

Is not this something more than fantasy?

What think you of it?

Without the sensible and true avouch

Of mine own eyes.

Hor. As thou art to thyself:

Such was the very armour he had on,

When he the ambitious Norway combated.

Mar. Thus, twice before, and jump at this dead hour,

With martial stalk hath he gone by our watch.

Hor. In what particular thought to work, I know not;

But in the gross and scope of mine opinion,

This bodes some strange eruption to our state.

In the most high and palmy state of Rome,

The graves stood tenantless, and the sheeted dead

Did squeak and gibber in the Roman streets....