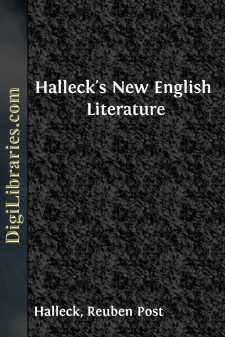 Subject Matter and Aim.—The history of English literature traces the development of the best poetry and prose written in English by the inhabitants of the British Isles. For more than twelve hundred years the Anglo-Saxon race has been producing this great literature, which includes among its achievements the incomparable work of Shakespeare.

This literature is so great in amount that the student who approaches the study without a guide is usually bewildered. He needs a history of English literature for the same reason that a traveler in England requires a guidebook. Such a history should do more than indicate where the choicest treasures of literature may be found; it should also show the interesting stages of development; it should emphasize some of the ideals that have made the Anglo-Saxons one of the most famous races in the world; and it should inspire a love for the reading of good literature.

No satisfactory definition of "literature" has ever been framed. Milton's conception of it was "something so written to after times, as they should not willingly let it die." Shakespeare's working definition of literature was something addressed not to after times but to an eternal present, and invested with such a touch of nature as to make the whole world kin. When he says of Duncan:—

he touches the feelings of mortals of all times and opens the door for imaginative activity, causing us to wonder why life should be a fitful fever, followed by an incommunicable sleep. Much of what we call literature would not survive the test of Shakespeare's definition; but true literature must appeal to imagination and feeling as well as to intellect. No mere definition can take the place of what may be called a feeling for literature. Such a feeling will develop as the best English poetry and prose: are sympathetically read. Wordsworth had this feeling when he defined the poets as those:—

"Who gave us nobler loves and nobler cares."

The Mission of English Literature.—It is a pertinent question to ask, What has English literature to offer?

In the first place, to quote Ben Jonson:—

"The thirst that from the soul cloth rise  Doth ask a drink divine."

English literature is of preëminent worth in helping to supply that thirst. It brings us face to face with great ideals, which increase our sense of responsibility for the stewardship of life and tend to raise the level of our individual achievement. We have a heightened sense of the demands which life makes and a better comprehension of the "far-off divine event" toward which we move, after we have heard Swinburne's ringing call:—

"…this thing is God,  To be man with thy might,  To grow straight in the strength    of thy spirit, and live out thy life    as the light."

We feel prompted to act on the suggestion of—

"…him who sings    To one clear harp in divers tones,    That men may rise on striping-stones  Of their dead selves to higher things."[4]

In the second place, the various spiritual activities demanded for the interpretation of the best things in literature add to enjoyment....