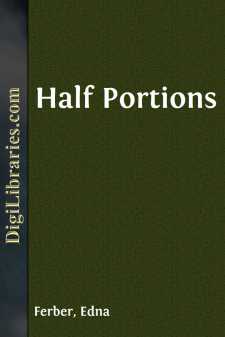 Called upon to describe Aunt Sophy you would have to coin a term or fall back on the dictionary definition of a spinster. "An unmarried woman," states that worthy work, baldly, "especially when no longer young." That, to the world, was Sophy Decker. Unmarried, certainly. And most certainly no longer young. In figure she was, at fifty, what is known in the corset ads as a "stylish stout." Well dressed in blue serge, with broad-toed health shoes and a small, astute hat. The blue serge was practical common sense. The health shoes were comfort. The hat was strictly business. Sophy Decker made and sold hats, both astute and ingenuous, to the female population of Chippewa, Wisconsin. Chippewa's East-End set bought the knowing type of hat, and the mill hands and hired girls bought the naïve ones. But whether lumpy or possessed of that indefinable thing known as line, Sophy Decker's hats were honest hats.

The world is full of Aunt Sophys, unsung. Plump, ruddy, capable women of middle age. Unwed, and rather looked down upon by a family of married sisters and tolerant, good-humoured brothers-in-law, and careless nieces and nephews.

"Poor Aunt Soph," with a significant half smile. "She's such a good old thing. And she's had so little in life, really."

She was, undoubtedly, a good old thing—Aunt Soph. Forever sending a spray of sweeping black paradise, like a jet of liquid velvet, to this pert little niece in Seattle; or taking Adele, sister Flora's daughter, to Chicago or New York, as a treat, on one of her buying trips. Burdening herself, on her business visits to these cities, with a dozen foolish shopping commissions for the idle women folk of her family. Hearing without partisanship her sisters' complaints about their husbands, and her sisters' husbands' complaints about their wives. It was always the same.

"I'm telling you this, Sophy. I wouldn't breathe it to another living soul. But I honestly think, sometimes, that if it weren't for the children—"

There is no knowing why they confided these things to Sophy instead of to each other, these wedded sisters of hers. Perhaps they held for each other an unuttered distrust or jealousy. Perhaps, in making a confidante of Sophy, there was something of the satisfaction that comes of dropping a surreptitious stone down a deep well and hearing it plunk, safe in the knowledge that it has struck no one and that it cannot rebound, lying there in the soft darkness. Sometimes they would end by saying, "But you don't know what it is, Sophy. You can't. I'm sure I don't know why I'm telling you all this."

But when Sophy answered, sagely, "I know; I know"—they paid little heed, once having unburdened themselves. The curious part of it is that she did know. She knew as a woman of fifty must know who, all her life, has given and given and in return has received nothing. Sophy Decker had never used the word inhibition in her life. I doubt if she knew what it meant. When you are busy copying French models for the fall trade you have little time or taste for Freud. She only knew (without in the least knowing she knew) that in giving of her goods, of her affections, of her time, of her energy, she found a certain relief. Her own people would have been shocked if you had told them that there was about this old maid aunt something rather splendidly Rabelaisian. Without being at all what is known as a masculine woman she had, somehow, acquired the man's viewpoint, his shrewd value sense. She ate a good deal, and enjoyed her food. She did not care for those queer little stories that married women sometimes tell, with narrowed eyes, but she was strangely tolerant of what is known as sin. So simple and direct she was that you wondered how she prospered in a line so subtle as the millinery business.

You might have got a fairly true characterization of Sophy Decker from one of fifty people: from a dapper salesman in a New York or Chicago wholesale millinery house; from Otis Cowan, cashier of the First National Bank of Chippewa; from Julia Gold, her head milliner and trimmer; from almost any one, in fact, except a member of her own family....