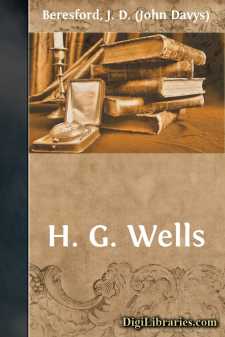 INTRODUCTION THE NORMALITY OF MR WELLS

In his Preface to the Unpleasant Plays, Mr Shaw boasts his possession of "normal sight." The adjective is the oculist's, and the application of it is Mr Shaw's, but while the phrase is misleading until it is explained to suit a particular purpose, it has a pleasing adaptability, and I can find none better as a key to the works of Mr H.G. Wells.

We need not bungle over the word "normal," in any attempt to meet the academic objection that it implies conformity to type. In this connection, the gifted possessor of normal sight is differentiated from his million neighbours by the fact that he wears no glasses; and if a few happy people still exist here and there who have no need for the mere physical assistance, the number of those whose mental outlook is undistorted by tradition, prejudice or some form of bias is so small that we regard them as inspired or criminal according to the inclination of our own beloved predilection. And no spectacles will correct the mental astigmatism of the multitude, a fact that is often a cause of considerable annoyance to the possessors of normal sight. That defect of vision, whether congenital or induced by the confinements of early training, persists and increases throughout life, like other forms of myopia. The man who sees a ball as slightly flattened, like a tangerine orange too tightly packed (an "oblate spheroid" would be the physicist's brief description), seeks the society of other men who share his illusion; and the company of them take arms against the opposing faction, which is confirmed in the belief that the ball is egg-shaped, that the bulge, in fact, is not "oblate" but "prolate."

I will not elaborate the parable; it is sufficient to indicate that in my reading of Mr Wells, I have seen him as regarding all life from a reasonable distance. By good fortune he avoided the influences of his early training, which was too ineffectual to leave any permanent mark upon him. His readers may infer, from certain descriptions in Kipps, and The History of Mr Polly, that Wells himself sincerely regrets the inadequacies of that "private school of dingy aspect and still dingier pretensions, where there were no object lessons, and the studies of book-keeping and French were pursued (but never effectually overtaken) under the guidance of an elderly gentleman, who wore a nondescript gown and took snuff, wrote copperplate, explained nothing, and used a cane with remarkable dexterity and gusto." But, properly considered, that inadequate elderly gentleman may be regarded as our benefactor. If he had been more apt in his methods, he might have influenced the blessed normality of his pupil, and bound upon him the spectacles of his own order. Worse still, Mr Wells might have been born into the leisured classes, and sent to Eton and Christchurch, and if his genius had found any expression after that awful experience, he would probably, at the best, have written polite essays or a history of Napoleon, during the intervals of his leisured activity as a member of the Upper House....