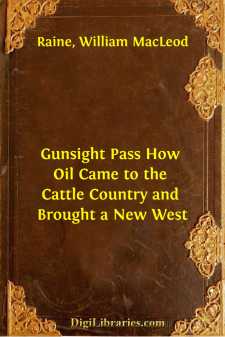 CHAPTER I "CROOKED AS A DOG'S HIND LAIG"

It was a land of splintered peaks, of deep, dry gorges, of barren mesas burnt by the suns of a million torrid summers. The normal condition of it was warfare. Life here had to protect itself with a tough, callous rind, to attack with a swift, deadly sting. Only the fit survived.

But moonlight had magically touched the hot, wrinkled earth with a fairy godmother's wand. It was bathed in a weird, mysterious beauty. Into the crotches of the hills lakes of wondrous color had been poured at sunset. The crests had flamed with crowns of glory, the cañons become deep pools of blue and purple shadow. Blurred by kindly darkness, the gaunt ridges had softened to pastels of violet and bony mountains to splendid sentinels keeping watch over a gulf of starlit space.

Around the camp-fire the drivers of the trail herd squatted on their heels or lay sprawled at indolent ease. The glow of the leaping flames from the twisted mesquite lit their lean faces, tanned to bronzed health by the beat of an untempered sun and the sweep of parched winds. Most of them were still young, scarcely out of their boyhood; a few had reached maturity. But all were products of the desert. The high-heeled boots, the leather chaps, the kerchiefs knotted round the neck, were worn at its insistence. Upon every line of their features, every shade of their thought, it had stamped its brand indelibly.

The talk was frank and elemental. It had the crisp crackle that goes with free, unfettered youth. In a parlor some of it would have been offensive, but under the stars of the open desert it was as natural as the life itself. They spoke of the spring rains, of the Crawford-Steelman feud, of how they meant to turn Malapi upside down in their frolic when they reached town. They "rode" each other with jokes that were familiar old friends. Their horse play was rough but good-natured.

Out of the soft shadows of the summer night a boy moved from the remuda toward the camp-fire. He was a lean, sandy-haired young fellow, his figure still lank and unfilled. In another year his shoulders would be broader, his frame would take on twenty pounds. As he sat down on the wagon tongue at the edge of the firelit circle the stringiness of his appearance became more noticeable.

A young man waved a hand toward him by way of introduction. "Gents of the D Bar Lazy R outfit, we now have with us roostin' on the wagon tongue Mr. David Sanders, formerly of Arizona, just returned from makin' love to his paint hoss. Mr. Sanders will make oration on the why, wherefore, and how-come-it of Chiquito's superiority to all other equines whatever."

The youth on the wagon tongue smiled. His blue eyes were gentle and friendly. From his pocket he had taken a knife and was sharpening it on one of his dawn-at-the-heel-boots.

"I'd like right well to make love to that pinto my own se'f, Bob," commented a weather-beaten puncher. "Any old time Dave wants to saw him off onto me at sixty dollars I'm here to do business."

"You're sure an easy mark, Buck," grunted a large fat man leaning against a wheel....