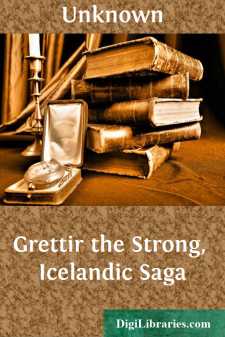 CHAPTER I. THE FAMILY AND EARLY WARS OF ONUND THE SON OF OFEIG

There was a man named Onund, the son of Ofeig Clumsyfoot, who was the son of Ivar Horsetail. Onund was the brother of Gudbjorg, the mother of Gudbrand Knob, the father of Asta, the mother of King Olaf the Saint. His mother came from the Upplands, while his father's relations were mostly in Rogaland and Hordland. He was a great viking and used to harry away in the West over the sea. He was accompanied on these expeditions by one Balki, the son of Blaeing from Sotanes, and by Orm the Wealthy. Another comrade of theirs was named Hallvard. They had five ships, all well equipped. They plundered the Hebrides, reaching the Barra Isles, where there ruled a king named Kjarval, who also had five ships. These they attacked; there was a fierce battle between them, in which Onund's men fought with the utmost bravery. After many had fallen on both sides, the battle ended with the king taking to flight with a single ship; the rest were captured by Onund's force, along with much booty. They stayed there for the winter, and spent the succeeding three summers harrying the coasts of Ireland and Scotland, after which they returned to Norway.

CHAPTER II. THE BATTLE OF HAFRSFJORD

At that time Norway was very disturbed. Harald Shockhead, the son of Halfdan the Black, till then king of the Upplands, was aiming at the supreme kingship. He went into the North and fought many battles there, in which he was always victorious. Then he marched harrying through the territories to the South, bringing them into subjection wherever he came. On reaching Hordland he was opposed by a motley multitude led by Kjotvi the Wealthy, Thorir Long-chin, and Soti and King Sulki from South Rogaland. Geirmund Swarthyskin was then away in the West, beyond the sea, so he was not present at the battle, although Hordland belonged to his dominion.

Onund and his party had arrived that autumn from the western seas, and when Thorir and Kjotvi heard of their landing they sent envoys to ask for their aid, promising to treat them with honour.

They were very anxious for an opportunity of distinguishing themselves, so they joined Thorir's forces, and declared that they would be in the thickest part of the battle. They met King Harald in a fjord in Rogaland called Hafrsfjord. The forces on each side were very large, and the battle was one of the greatest ever fought in Norway. There are many accounts of it, for one always hears much about those people of whom the saga is told. Troops had come in from all the country around and from other countries as well, besides a multitude of vikings. Onund brought his ship alongside of that of Thorir Long-chin in the very middle of the battle. King Harald made for Thorir's ship, knowing him to be a terrible berserk, and very brave. The fighting was desperate on either side. Then the king ordered his berserks, the men called Wolfskins, forward. No iron could hurt them, and when they charged nothing could withstand them. Thorir defended himself bravely and fell on his ship fighting valiantly....