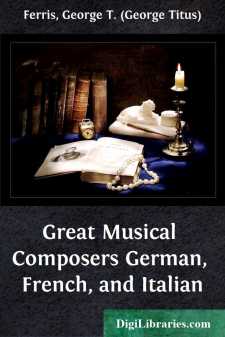 THE following biographical sketches were originally published in America by Mr. George T. Ferris, in two volumes, separately entitled The Great German Composers and The Great Italian and French Composers. They have achieved the success they deserved: for while we have whole libraries of books upon the history and technicalities of music in general, upon musical theories and schools, and upon the exponents thereof in their artistic capacity, there has been a distinct dearth of treatises dealing in a brief and popular fashion with the lives of eminent composers themselves. Now, when music is “mastered and murdered” in almost every house throughout the length and breadth of the land, there can be no doubt that compilations of this kind must be welcome to a very large number—we will not say of musical students, but of lovers of music. There are, it would be needless to attempt to prove, great numbers of the music-loving public, who practically have no facilities towards making acquaintance with the leading facts in the lives of those men whose compositions they have such a genuine delight in rendering: to these mainly is such a book as Great Composers addressed. But, indeed, to every one interested in music and musicians the volume can hardly fail to be of interest. In his preface to The Great Italian and French Composers, Mr. Ferris explained that—as was very manifest—“the task of compressing into one small volume suitable sketches of the more famous Italian and French composers was, in view of the extent of field and the wealth of material, a somewhat embarrassing one, especially as the purpose was to make the sketches of interest to the general music-loving public, and not merely to the critic and scholar. The plan pursued has been to devote the bulk of space to composers of the higher rank, and to pass over those less known with such brief mention as sufficed to outline their lives, and fix their place in the history of music.”

To The Great German Composers he prefaces a few words which may be quoted—“The sketches of composers contained in this volume may seem arbitrary in the space allotted to them. The special attention given to certain names has been prompted as much by their association with great art epochs, as by the consideration of their absolute rank as composers. The introduction of Chopin, born a Pole, and for a large part of his life a resident of France, among German composers, may require an explanatory word. Chopin’s whole early training was in the German school, and he may be looked on as one of the founders of the latest school of pianoforte composition, whose highest development is in contemporary Germany. He represents German music by his affinities and his influences in art, and bears too close a relation to important changes in musical forms to be omitted from this series.”

Various important events have occurred since the publication of these volumes in America: inter alia, the performance of Wagner’s last great work “Parsifal,” and the death of the great German musician; the production of new works by Gounod and Verdi; and so forth....