Great Men and Famous Women, Vol. 8 A series of pen and pencil sketches of the lives of more than 200 of the most prominent personages in History 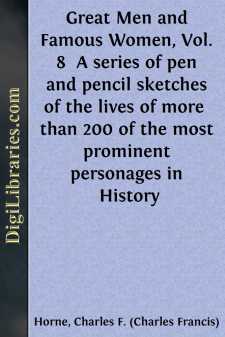 Phidias, one of the greatest sculptors the world has seen, and whose name has become, as it were, the synonym of his art, was born at Athens about 500 B.C. He belonged to a family of artists, none of whom indeed were distinguished in their profession, but their varied occupations furnished the atmosphere in which such a talent as that of Phidias could best be fostered and brought to maturity. His father was Charmides, who is believed to have been an artist, because the Greeks, in their inscriptions, did not associate the name of the father with that of the son unless both were of the same calling. A brother of Phidias, Panœnos, was a painter, and is mentioned among those artists, twenty or more in number, who in conjunction with Polygnotus, one of the chief painters of his day, were employed in the decoration of the Pœcile or Painted Portico, one of the many beautiful buildings erected by Cimon. The Pœcile was simply a long platform, with a roof supported by a row of columns on one side and by a wall on the other. It was called "the painted," because the wall at the back was covered with a series of large historical pictures containing many figures, and recording some of the chief events of the time, together with others relating to an earlier and more shadowy epoch. The subject of the painting, executed, at least in part, by the brother of Phidias, was the Battle of Marathon, in which great event it is thought he may himself have taken part.

The boyhood of Phidias fell in a time of national revival, when under the influence of an ennobling political excitement, all the arts were quickened to a fresh, original, and splendid growth. The contest between the Greeks and Persians, which had begun with the Ionian revolt, was in full activity at the time of his birth. He was ten years old when the battle of Marathon was fought, and when he was twenty, four of the most striking events in the history of Greece were crowded into a single year; the battle of Thermopylæ, the victory at Salamis, and the twin glories of Platæa and Mycale. His early youth, therefore, was nourished by the inspiring influences that come from the victorious struggle of a people to maintain their national life. He was by no means the only sculptor of his time whom fame remembers, but he alone, rejecting trivial themes, consecrated his talent to the nobler subjects of his country's religious life and the ideal conception of her protecting gods. No doubt, Phidias, like all who are born with the artistic temperament, would be interested from childhood in the progress of the splendid works with which Athens was enriching herself under the rule of Cimon. But his interest must have been greatly increased by the fact that his brother Panœnos was actively engaged in the decoration of one of those buildings. It would be natural that he should be often drawn to the place where his brother was at work, and that the sight of so many artists, most of them young men, filled with the generous ardor of youth, and inspired by the nature of their task, should have stirred in him an answering enthusiasm. It gives us a thrill of pleasure to read in the list of these youths the name of the great tragic poet, Euripides, who began life as a painter, and in whose plays we find more than one reference to the art. It cannot be thought unreasonable to suppose that two such intelligences as these must have had an attraction for one another, and that, as in the case of Dante and Giotto, the great poet and the great artist would be drawn together by a likeness in their taste and aims.

Phidias studied his art first at Athens, with a native sculptor, Hegias, of whom we know nothing except from books. Later, he went to Argos, and there put himself under the instruction of Ageladas, a worker chiefly in bronze, and very famous in his time, of whom, however, nothing remains but the memory of a few of his more notable works. For us, his own works forgotten, he remains in honor as the teacher of Myron, of Polycletus, and of Phidias, the three chief sculptors of the next generation to his own. On leaving the workshop of Ageladas, Phidias executed several statues that brought him prominently before the public. For Delphi, he made a group of thirteen figures in bronze, to celebrate the battle of Marathon and apotheosize the heroes of Attica. In this group, Miltiades was placed in the centre, between Athena, the tutelary goddess of Athens, and Apollo, the guardian of Delphi; while on each side were five Athenian heroes, Theseus and Codrus with others, arranged in a semicircle....