Great Men and Famous Women, Vol. 7 A Series of Pen and Pencil Sketches of the Lives of More Than 200 of the Most Prominent Personages in History 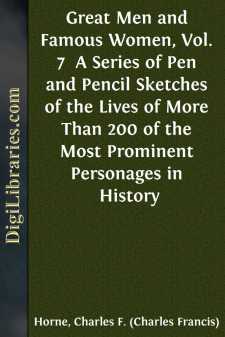 The poems of Homer differ from all other known poetry in this, that they constitute in themselves an encyclopædia of life and knowledge at a time when knowledge, indeed, such as lies beyond the bounds of actual experience, was extremely limited, but when life was singularly fresh, vivid, and expansive. The only poems of Homer we possess are the "Iliad" and the "Odyssey," for the Homeric hymns and other productions lose all title to stand in line with these wonderful works, by reason of conflict in a multitude of particulars with the witness of the text, as well as of their poetical inferiority. They evidently belong to the period that follows the great migration into Asia Minor, brought about by the Dorian conquest.

The dictum of Herodotus, which places the date of Homer four hundred years before his own, therefore in the ninth century B.C., was little better than mere conjecture. Common opinion has certainly presumed him to be posterior to the Dorian conquest. The "Hymn to Apollo," however, which was the main prop of this opinion, is assuredly not his. In a work which attempts to turn recent discovery to account, I have contended that the fall of Troy cannot properly be brought lower than about 1250 B.C., and that Homer may probably have lived within fifty years of it.

The entire presentation of life and character in the two poems is distinct from, and manifestly anterior to, anything made known to us in Greece under and after that conquest. The study of Homer has been darkened and enfeebled by thrusting backward into it a vast mass of matter belonging to these later periods, and even to the Roman civilization, which was different in spirit and which entirely lost sight of the true position of Greeks and Trojans and inverted their moral as well as their martial relations. The name of Greeks is a Roman name; the people to whom Homer has given immortal fame are Achaians, both in designation and in manners. The poet paints them at a time when the spirit of national life was rising within their borders. Its first efforts had been seen in the expeditions of Achaian natives to conquer the Asiatic or Egyptian immigrants who had, under the name of Cadmeians (etymologically, "foreigners"), founded Thebes in Bœotia, and in the voyage of the ship Argo to Colchis, which was probably the seat of a colony sprung from the Egyptian empire, and was therefore regarded as hostile in memory of the antecedent aggressions of that empire. The expedition against Troy was the beginning of the long chain of conflicts between Europe and Asia, which end with the Turkish conquests and with the reaction of the last three hundred years, and especially of the nineteenth century, against them. It represents an effort truly enormous toward attaining nationality in idea and in practice. Clearing away obstructions, of which the cause has been partially indicated, we must next observe that the text of Homer was never studied by the moderns as a whole in a searching manner until within the last two generations. From the time of Wolf there was infinite controversy about the works and the authorship, with little positive result, except the establishment of the fact that they were not written but handed down by memory, an operation aided and methodized by the high position of bards as such in Greece (more properly Achaia, and afterward Hellas), by the formation of a separate school to hand down these particular songs, and by the great institution of the Games at a variety of points in the country. At these centres there were public recitations even before the poems were composed, and the uncertainties of individual memory were limited and corrected by competition carried on in a presence of a people eminently endowed with the literary faculty, and by the vast national importance of handing down faithfully a record which was the chief authority touching the religion, history, political divisions, and manners of the country....