Great Men and Famous Women. Vol. 6 A series of pen and pencil sketches of the lives of more than 200 of the most prominent personages in History 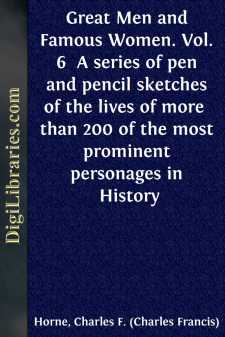 Some of Arnold's biographers have declared that he was a very vicious boy, and have chiefly illustrated this fact by painting him as a ruthless robber of birds'-nests. But a great many boys who began life by robbing birds'-nests have ended it much more creditably. The astonishing and interesting element in Benedict Arnold's career was what one might term the anomaly and incongruity of his treason. Born at Norwich, Conn., in 1741, he was blessed from his earliest years by wholesome parental influences. The education which he received was an excellent one, considering his colonial environment. Tales of his boyish pluck and hardihood cannot be disputed, while others that record his youthful cruelty are doubtless the coinings of slander. It is certain that in 1755, when the conflict known as "the old French war" first broke out, he gave marked proof of patriotism, though as yet the merest lad. Later, at the very beginning of the Revolution, he left his thriving business as a West India merchant in New Haven and headed a company of volunteers. Before the end of 1775 he had been made a commissioned colonel by the authorities of Massachusetts, and had marched through a sally-port, capturing the fortress of Ticonderoga, with tough old Ethan Allen at his side and 83 "Green Mountain Boys" behind him. Later, at the siege of Quebec, he behaved with splendid courage. Through great difficulties and hardships he dauntlessly led his band to the high-perched and almost impregnable town. Pages might be filled in telling how toilsome was this campaign, now requiring canoes and bateaux, now taxing the strength of its resolute little horde with rough rocks, delusive bogs and all those fiercest terrors of famine which lurk in a virgin wilderness. Bitter cold, unmerciful snow-falls, drift-clogged streams, pelting storms, were constant features of Arnold's intrepid march. When we realize the purely unselfish and disinterested motive of this march, which has justly been compared to that of Xenophon with his 10,000, and to the retreat of Napoleon from Moscow as well, we stand aghast at the possibility of its having been planned and executed by one who afterward became the basest of traitors.

During the siege of Quebec Arnold was severely wounded, and yet he obstinately kept up the blockade even while he lay in the hospital, beset by obstacles, of which bodily pain was doubtless not the least. The arrival of General Wooster from Montreal with reinforcements rid Arnold, however, of all responsibility. Soon afterward the scheme of capturing Quebec and inducing the Canadas to join the cause of the United Colonies, came to an abrupt end. But in his desire to effect this purpose Arnold had identified himself with such lovers of their country as Washington, Schuyler, and Montgomery. And if the gallant Montgomery had then survived and Arnold had been killed, history could not sufficiently have eulogized him as a hero. Soon afterward he was promoted to the rank of brigadier-general, and on October 11, 1776, while commanding a flotilla of small vessels on Lake Champlain, he gained new celebrity for courage. The enemy was greatly superior in number to Arnold's forces. "They had," says Bancroft, "more than twice his weight of metal and twice as many fighting vessels, and skilled seamen and officers against landsmen." Arnold was not victorious in this naval fray, but again we find him full of lion-like valor. He was in the Congress galley, and there with his own hands often aimed the cannon on its bloody decks against the swarming masses of British gunboats. Arnold's popularity was very much augmented by his fine exploits on Lake Champlain. "With consummate address," says Sparks, "he penetrated the enemy's lines and brought off his whole fleet, shattered and disabled as it was, and succeeded in saving six of his vessels, and, it might be added, most of his men." Again, at the battle of Danbury he tempted death countless times; and at Loudon's Ferry and Bemis's Heights his prowess and nerve were the perfection of martial merit. It has been stated by one or two historians of good repute that Arnold was not present at all during the battle of Saratoga; but the latest and most trustworthy researches on this point would seem to indicate that he commanded there with discretion and skill. He was now a major-general, but his irascible spirit had previously been hurt by the tardiness with which this honor was conferred upon him, five of his juniors having received it before himself. He strongly disliked General Gates, too, and quarrelled with him because of what he held to be unfair behavior during the engagement at Bemis's Heights. At Stillwater, a month or so later in the same year (1777), he issued orders without Gates's permission, and conducted himself on the field with a kind of mad frenzy, riding hither and thither and seeking the most dangerous spots. All concur in stating, however, that his disregard of life was admirable, in spite of its foolish rashness. In this action he was also severely wounded.

One year later he was appointed to the command of Philadelphia, and here he married the daughter of a prominent citizen, Edward Shippen. This was his second marriage; he had been a widower for a number of years before its occurrence, and the father of three sons....