Great Men and Famous Women. Vol. 2 A series of pen and pencil sketches of the lives of more than 200 of the most prominent personages in History 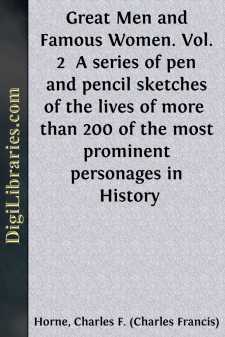 Henri de la Tour d'Auvergne, Vicomte de Turenne, esteemed, after Napoleon, the greatest of French generals, was born September 16, 1611. He was the second son of the Duc de Bouillon, Prince of Sedan, and of Elizabeth of Nassau, daughter of the celebrated William of Orange, to whose courage and talents the Netherlands mainly owed their deliverance from Spain. Both parents being zealous Calvinists, Turenne was of course brought up in the same faith. Soon after his father's death, the duchess sent him, when he was not yet thirteen years old, into the Low Countries, to learn the art of war under his uncle, Maurice of Nassau, who commanded the troops of Holland in the protracted struggle between that country and Spain. Maurice held that there was no royal road to military skill, and placed his young relation in the ranks, as a volunteer, where for some time he served, enduring all hardships to which the common soldiers were exposed. In his second campaign he was promoted to the command of a company, which he retained for four years, distinguished by the admirable discipline of his men, by unceasing attention to the due performance of his own duty, and by his eagerness to witness, and become thoroughly acquainted with, every branch of service. In the year 1630, family circumstances rendered it expedient that he should return to France, where the Court received him with distinction, and invested him with the command of a regiment.

Four years elapsed before Turenne had an opportunity of distinguishing himself in the service of his native country. His first laurels were reaped in 1634, at the siege of the strong fortress of La Motte, in Lorraine, where he headed the assault, and, by his skill and bravery, mainly contributed to its success. For this exploit he was raised, at the early stage of twenty-three, to the rank of Maréchal de Camp, the second grade of military rank in France. In the following year, the breaking out of war between France and Austria opened a wider field of action. Turenne held a subordinate command in the army, which, under the Cardinal de la Valette, marched into Germany to support the Swedes, commanded by the Duke of Weimar. At first fortune smiled on the allies; but, ere long, scarcity of provisions compelled them to a disastrous retreat over a ruined country, in the face of the enemy. On this occasion the young soldier's ability and disinterestedness were equally conspicuous. He sold his plate and equipage for the use of the army; threw away his baggage to load the wagons with those stragglers who must otherwise have been abandoned; and marched on foot, while he gave up his own horse to the relief of one who had fallen, exhausted by hunger and fatigue. These are the acts which win the attachment of soldiers, and Turenne was idolized by his.

Our limits will not allow of the relation of those campaigns in which the subject of this memoir filled a subordinate part. In 1637-38 he again served under La Valette, in Flanders and Germany, after which he was made Lieutenant-general, a rank not previously existing in France....