Great Men and Famous Women. Vol. 1 A series of pen and pencil sketches of the lives of more than 200 of the most prominent personages in History 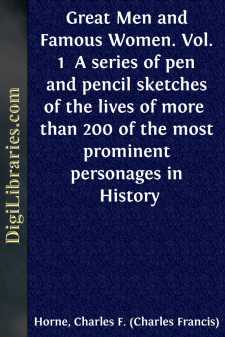 With the death of Sardanapalus, the great monarch of Assyria, and the taking of Nineveh, the capital city, by the Medes, the kingdom of Assyria came to an end, and the vast domain was parcelled out among the conquerors. At the time of the catastrophe, the district of Babylonia, with its capital city Babylon, was ruled as a dependent satrapy of Assyria by Nabopolassar. Aided by the Medes, he now took possession of the province and established himself as an independent monarch, strengthening the alliance by a marriage between the Princess Amuhia, the daughter of the Median king, and his son Nebuchadnezzar.

In the partition of Assyria, the region stretching from Egypt to the upper Euphrates, including Syria, Phœnicia, and Palestine, had fallen to the share of Nabopolassar. But the tribes that peopled it were not disposed to accept the rule of the new claimant, and looked about for an ally to support them in their resistance. Such an ally they thought they had found in Egypt.

Egypt was the great rival of Babylon, as she had been of Assyria. Both desired to control the highways of traffic connecting the Mediterranean with the farther East. Egypt had the advantage, both from her actual position on the Mediterranean and her nearer neighborhood to the coveted territory, and she used her advantage with audacity and skill. No sooner, however, did Nabopolassar feel himself firm on his throne than he resolved to check the ambition of Egypt and secure for himself the sovereignty of the lands in dispute.

The task was not an easy one. Pharaoh Necho had been for three years in possession of the whole strip along the Mediterranean—Palestine, Phœnicia, and part of Syria—and was pushing victoriously on to Assyria, when he was met at the plain of Megiddo, commanding the principal pass in the range of Mount Carmel, by the forces of the petty kingdom of Judah, disputing his advance. He defeated them in a bloody engagement, in which Josiah, King of Judah, was slain, and then continued his march to Carchemish, a stronghold built to defend one of the few fordable passes of the upper Euphrates. This important place having been taken after a bloody battle, Necho was master of all the strategic points north and west of Babylonia.

Nebuchadnezzar was now put in command of an army, to force Pharaoh to give up his prey. Marching directly upon Carchemish, he attacked the Egyptian and defeated him with great slaughter. Following up his victory, he wrested from Pharaoh, in engagement after engagement, all that he had gained in Syria, Phœnicia, and Palestine, and was in the midst of fighting in Egypt itself, when the news came of the death of his father; and he hastened home at once by forced marches to secure his possession of the throne. In his train were captives of all the nations he had conquered: Syrians, Phœnicians, Jews, and Egyptians. Among the Jewish prisoners was Daniel, the author of the book of the Old Testament called by his name, and to whom we owe the little personal knowledge we have of the great Babylonian monarch.

Of all the conquests of Nebuchadnezzar in this long struggle with Egypt, that of the Jewish people is the most interesting to us. The Jews had fought hard for independence, but if they must be conquered and held in subjection, they preferred the rule of Egypt to that of Babylon. Even the long slavery of their ancestors in that country and the sufferings it had entailed, with the tragic memories of the exodus and the wanderings in the desert, had not been potent to blot out the traditions of the years passed in that pleasant land with its delicious climate, its nourishing and abundant food....