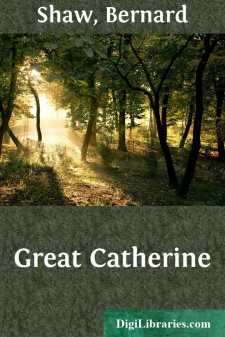 Exception has been taken to the title of this seeming tomfoolery on the ground that the Catherine it represents is not Great Catherine, but the Catherine whose gallantries provide some of the lightest pages of modern history. Great Catherine, it is said, was the Catherine whose diplomacy, whose campaigns and conquests, whose plans of Liberal reform, whose correspondence with Grimm and Voltaire enabled her to cut such a magnificent figure in the eighteenth century. In reply, I can only confess that Catherine's diplomacy and her conquests do not interest me. It is clear to me that neither she nor the statesmen with whom she played this mischievous kind of political chess had any notion of the real history of their own times, or of the real forces that were moulding Europe. The French Revolution, which made such short work of Catherine's Voltairean principles, surprised and scandalized her as much as it surprised and scandalized any provincial governess in the French chateaux.

The main difference between her and our modern Liberal Governments was that whereas she talked and wrote quite intelligently about Liberal principles before she was frightened into making such talking and writing a flogging matter, our Liberal ministers take the name of Liberalism in vain without knowing or caring enough about its meaning even to talk and scribble about it, and pass their flogging Bills, and institute their prosecutions for sedition and blasphemy and so forth, without the faintest suspicion that such proceedings need any apology from the Liberal point of view.

It was quite easy for Patiomkin to humbug Catherine as to the condition of Russia by conducting her through sham cities run up for the occasion by scenic artists; but in the little world of European court intrigue and dynastic diplomacy which was the only world she knew she was more than a match for him and for all the rest of her contemporaries. In such intrigue and diplomacy, however, there was no romance, no scientific political interest, nothing that a sane mind can now retain even if it can be persuaded to waste time in reading it up. But Catherine as a woman with plenty of character and (as we should say) no morals, still fascinates and amuses us as she fascinated and amused her contemporaries. They were great sentimental comedians, these Peters, Elizabeths, and Catherines who played their Tsarships as eccentric character parts, and produced scene after scene of furious harlequinade with the monarch as clown, and of tragic relief in the torture chamber with the monarch as pantomime demon committing real atrocities, not forgetting the indispensable love interest on an enormous and utterly indecorous scale. Catherine kept this vast Guignol Theatre open for nearly half a century, not as a Russian, but as a highly domesticated German lady whose household routine was not at all so unlike that of Queen Victoria as might be expected from the difference in their notions of propriety in sexual relations.

In short, if Byron leaves you with an impression that he said very little about Catherine, and that little not what was best worth saying, I beg to correct your impression by assuring you that what Byron said was all there really is to say that is worth saying. His Catherine is my Catherine and everybody's Catherine. The young man who gains her favor is a Spanish nobleman in his version. I have made him an English country gentleman, who gets out of his rather dangerous scrape, by simplicity, sincerity, and the courage of these qualities. By this I have given some offence to the many Britons who see themselves as heroes: what they mean by heroes being theatrical snobs of superhuman pretensions which, though quite groundless, are admitted with awe by the rest of the human race. They say I think an Englishman a fool. When I do, they have themselves to thank.

I must not, however, pretend that historical portraiture was the motive of a play that will leave the reader as ignorant of Russian history as he may be now before he has turned the page....