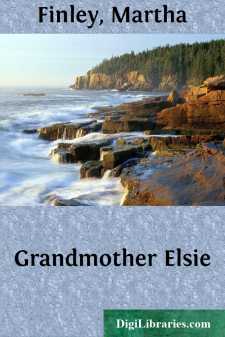 "Every state,Allotted to the race of man below,Is in proportion, doom'd to taste some sorrow."—Rowe.

The Ion family were at home again after their summer on the New Jersey coast.

It was a delightful morning early in October: the dew-drops on the still green grass of the neatly kept lawn sparkled in the rays of the newly risen sun; the bright waters of the lakelet also, as, ruffled by the breeze, they broke gently about the prow of the pretty row-boat moored to the little wharf; the gardens were gay with bright-hued flowers, the trees gorgeous in their autumnal dress.

But though doors and windows were open, the gardener and his assistants at work in the grounds, there seemed a strange quiet about the place: when the men spoke to each other it was in subdued tones; there was no sound—as in other days—of little feet running hither and thither, nor of childish prattle or laughter.

Two horses stood ready saddled and bridled before the principal entrance to the mansion, and Mr. Horace Dinsmore was pacing the veranda to and fro with slow, meditative step, while Bruno, crouching beside the door, followed his movements with wistful, questioning eyes, doubtless wondering what had become of his accustomed merry, romping play-mates.

A light step came down the hall, and a lady in riding hat and habit stepped from the open doorway, stooped for an instant to touch the dog's head caressingly with a "Poor Bruno! do you miss your playfellows?" then glided quickly toward Mr. Dinsmore, who received her with open arms and tenderest caress.

Then holding her off and scrutinizing the sweet, fair face with keen, searching eye, "You are looking better and brighter than I dared to hope, my darling," he said. "Did you get some sleep?"

"Yes, papa, thank you, several hours. And you? did you rest well?"

"Yes, daughter. How are the children?"

"No worse, Arthur says; perhaps a trifle better. He, Elsie and Mammy are with them now, and 'Mamma' can be spared for a short ride with her father," she said, smiling lovingly into the eyes that were gazing with the tenderest fatherly affection upon her.

"That is right; you need the air and exercise sorely; a few more days of such close confinement and assiduous nursing would, I very much fear, tell seriously upon your health."

He led her to the side of her steed and assisted her into the saddle as he spoke, then vaulted into his own with the agility of youth.

"But where are Vi and her brothers?" Elsie asked, sending an inquiring glance from side to side.

"I sent them on in advance. I wanted you quite to myself this once," he answered, as they turned and rode at a brisk canter down the avenue.

"And I shall enjoy having my dear father all to myself for once," she rejoined, with a touch of old-time gayety in look and tone. "Ah! papa, never a day passes, I think I might almost say never an hour, in which I do not thank God for sparing you to me; you who have loved and cherished me so long and so tenderly."

"My own dear child!" he said in reply, "you and your love are among the greatest blessings of my life."

As they rode on side by side they talked of the youngest two of her children—Rose and Walter—both quite ill with measles; of her sister's family, where also there was sickness among the little ones, and whither Mrs....